By DAN BILAWSKY
October 3, 2012
Sign in to view read count 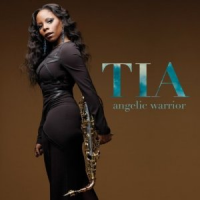 The title of saxophonist Tia Fuller's third album for the Mack Avenue imprint is a bit of an oxymoron, yet it fits her sound so well. Fuller's saxophone work exhibits a bright tone, but her soloing is often full of dark thoughts and her oft-agreeable and positive musical persona belies the fact that she has razor sharp chops that can dig into the auditory canal in powerful and pleasurable ways.

Fuller is constantly at work, but her own music has often been put on the back burner so she can lend her soulful sound to artists like pop star Beyoncé or bassist/vocalist extraordinaire Esperanza Spalding. Thankfully, she took the time to focus on her own music again, fully investing herself in original works on Angelic Warrior. Fuller penned ten of the thirteen tracks for this outing, and each one was built with a solid sense of purpose and passion. The driving "Royston Rumble," which highlights the chemistry between her sister/pianist Shamie Royston and brother-in-law/drummer Rudy Royston starts things off with a bang. Shamie takes a McCoy Tyner-derived, percussive approach to the piano here and Rudy stirs up a storm with his cyclonic drumming. This is the first of five tracks to feature John Patitucci's guitar-like piccolo bass work and his playing is nothing short of remarkable. His dexterous skills on this axe make him a fully capable front line partner for Fuller, and he sounds like a new man as he leaves the bottom end of the sound spectrum behind.

Light Latin underpinnings ("Ralphie's Groove"), slamming, contemporary soul jazz fusion ("Tailor Made"), a bout of slightly mournful elegance ("Core Of Me"), and swing ("Simpli-City") all surface at one time or another as Fuller fully embraces the concept of stylistic variety. She can exhibit poetic grace, as demonstrated on the two "Ode To Be" vignettes, but she can also get down and dirty, as shown during a saxophone-drums-bass three way on a Cole Porter mash-up entitled "So In Love With All Of You." While this standard(s) rewrite proves to be one of the strongest performances on the album, the other two classics included on the playlist don't work quite as well. The rumbling undercarriage of "Cherokee" proves to be too distracting and "Body and Soul," which features vocalist Dianne Reeves, is a little out of place. This harmonically tweaked, neo-soul take on this oft-performed number feels a bit stiff and uncomfortable compared to the other material on this date; it might have worked better as a bonus track.

On the whole, Fuller finds sure-footing and artistic success as she molds all of the elements in the modern jazz melting pot to her liking. She is fierce, friendly, cutting, kind and calculating all at once; Tia Fuller is the angelic warrior of which she speaks.

Royston Rumble; Ralphie's Groove; Angelic Warrior; Lil Les; Body And Soul; Descend To Barbados; Ode To Be [Interlude]; So In Love WithAll Of You; Tailor Made; Core Of Me; Simpli-City; Cherokee; Ode To Be [Outro].