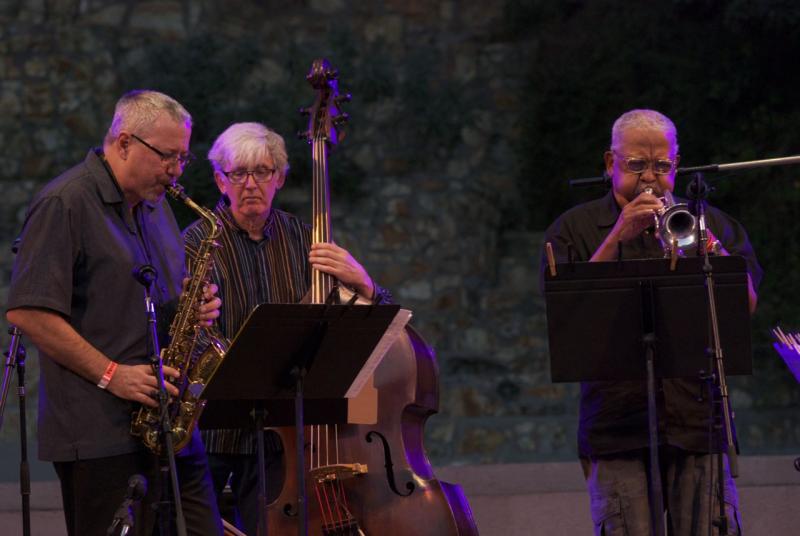 Drummer Peter Erskine's New Trio opened the proceedings with a simmering, original composition. One of the driving, rhythmic forces who, along with fiery bassist Jaco Pastorius, propelled Weather Report in the '80s, the veteran drummer's light touch provided a soothing contrast to the sturdier percussive grooves of rising piano star, Vardan Ovsepian and bassist Damian Erskine, with whom the drummer has perpetuated the jazz lineage on a genetic level. On another tune, Erskine picked up the pace and intensity, while Ovsepian and bassist Erskine dreamily explored musical space and time. The New Trio generally maintained a mood of gentle, airy sound exploration: almost, perhaps, "light as a feather."

Bassist Mark Dresser's Quintet followed with a more rambunctious set, beginning with "Digestivo," a Dresser original with a Charles Mingus and Thelonious Monk-like sound, redolent of those jazz giants' unconventional tempos and note selection. Hyperpianist Denman Maroney won the award for most creative and annoying sounds (think blackboard scratching) in the progressive music category, while Dresser stroked his bass like he was angrily plucking petals off a daisy. If nothing else, Maroney's assault on the piano's strings awakened anyone dozing off in the balmy, early evening air.

At this point, Dresser introduced cornetist Bobby Bradford, a seminal figure in the L.A. musical avant-garde scene. Bradford-with whom Dresser performed nearly 40 years ago in drummer/writer Stanley Crouch's band, Black Music Infinity, along with sax masters David Murray and Arthur Blythe-grew up in Dallas, Texas where he and trailblazing saxophonist Ornette Coleman first hooked up, performing and recording together in the '60s and '70s, thus extending the evening's musical lineage back to the 1950s. 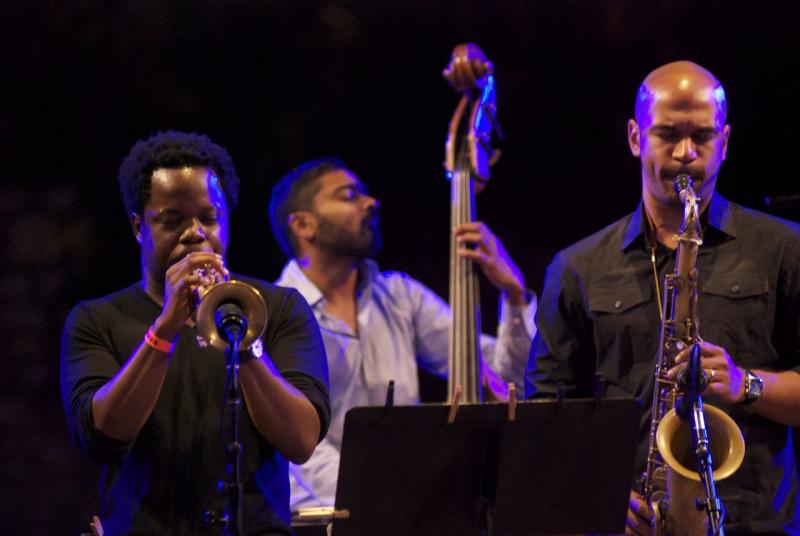 Trumpeter Ambrose Akinmusire, he of the meteoric rise and soaring sound, brought his quintet to the stage just as night fell over the Ford. The band instantly ignited, burning with an up-tempo sound that recalled trumpeter Miles Davis' second great ensemble. Tenor man Walter Smith III's angular attack, recalling the inimitable Wayne Shorter, incited Akinmusire to blow crystalline sounds over the rhythm section's electric pace. On the balladic "Regret No More," from the trumpeter's When the Heart Emerges Glistening (Blue Note, 2011), Akinsumire blew with the same confident tone and impeccable breath control that helped him capture the 2007 Thelonious Monk Institute's top prize in 2007. Bassist Harish Raghavan also got the chance to show off his rapidly developing bass chops.

In between sets, Southland jazz fans were treated to an announcement by the public face and artistic director of the much missed Jazz Bakery, Ruth Price, who injected a desperately needed dose of optimism for everyone concerned about the future of jazz in Los Angeles. While the fundraising for the actual construction of the Bakery's new home continues, jazz potentate/trumpeter Wynton Marsalis called and volunteered his skills and experience to the Jazz Bakery project. He hoped to help über-architect Frank Gehry avoid some of the acoustical pitfalls faced by Lincoln Center Jazz during its construction. Welcome news, indeed. 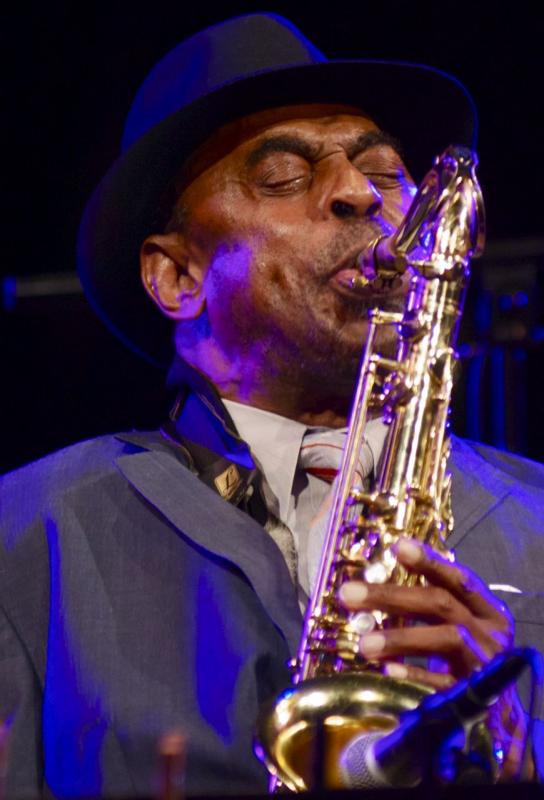 Saxophonist Archie Shepp, a leading voice in the avant-garde jazz of the 1960s, unquestionably provided the highlight of the evening's program. Shepp tore right into the original "Hope Too," dedicated to the late and criminally under-appreciated pianist, Elmo Hope. As Shepp punctuated his potent, bluesy tenor with visceral honks and yelps, the rhythm section, led by pianist McCoy Tyner's long-time bassist Avery Sharpe, swung its collective butt off. It took awhile, but this band finally got most of the feet in the audience tappin' to the swingin' beat, a somewhat unexpected development for those familiar with Shepp's earlier, "out" style.

An even more unexpected turn of events came on Duke Ellington's "Don't Get Around Much Anymore," when Shepp, the sax man who, along with John Coltrane, stunned listeners at the 1965 Newport Jazz Festival with the "new thing," stood up and, with a deep and mellow voice, sang the tune's familiar lyrics. The band, now joined by Akinmusire (with whom Shepp has been touring of late), closed with a blues dedicated to the seminal and tragic blues diva, Bessie Smith. Shepp alternately shouted and blew his sax with primal inspiration, like a down-home preacher deliverin' a Sunday sermon. Meanwhile, drummer Steve McCraven extended the lineage theme back even further into the nation's antebellum era, performing a traditional "hambone," slappin' out the rhythm on his body, old school style. The appreciative audience responded with a long and well-deserved standing ovation for Shepp, who gave a clinic on the oft-pursued but infrequently achieved original sound.

Once again, Angel City Jazz has staked its claim as one of the most progressive jazz fests around. In year's past, Somazzi and Angel City Jazz have consistently booked the finest jazz musicians, including many who rarely appear here like Henry Grimes, Wadada Leo Smith, Oliver Lake, {{Nels Cline} and many more. More importantly, Somazzi has never compromised his artistic vision by including commercially popular bands, as nearly every other so-called jazz festival has done. Except, perhaps, for New York's Vision Festival and a handful of other music fests, Angel City is one of those rare productions where serious jazz lovers can safely go in the US without fearing the dreaded and deadly smooth jazz virus, or worse. No such worries here!