By EYAL HAREUVENI
June 9, 2012
Sign in to view read count 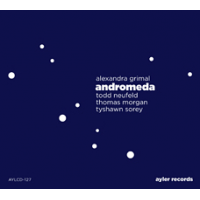 ADVERTISEMENT
Similar to Koan, Grimal's Andromeda resists categorization. It is an intimate exploration of the relation between time, sound and space that tends to be ethereal and minimalist in spirit. Grimal is an equal partner to the other musicians, though on the longest pieces, Sorey is the dominant player. The tone is spare, almost weightless; restrained and ascetic, silence is often used as a key element. The progression of each part of this symphony moves patiently and methodically amongst each of its sonic articulations.

After two short, Morton Feldman-esque abstract and minimalist pieces, "Cassiopée"—one of the composition's three longest parts—progresses gently, as if each of the spare sonic expressions carries significant weight. Suddenly, it blossoms from its former severity into short, playfully improvised interplay that than withdraws again into a minimalist conclusion. "Algieba" moves slowly between contemplative, short components, shapes and dynamics until it manifest itself as a powerful cohesive piece.

Sorey and Morgan construct the gentle flow of "Ulysse," one of the less minimal pieces that, instead, references chamber jazz. Over its rhythmic flow, Grimal and Neufeld touch and go with their brief improvisations. The title piece concludes this cerebral, sonic journey; haunting, it combines the light and playful narrative and quiet, minimalist aesthetic of the symphony's first parts.