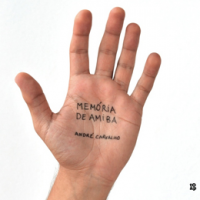 Subtlety and gentility are not qualities that our modern world tends to value significantly, but in jazz they can add greatly to the listening experience. Think perhaps of say a Bill Evans and Jim Hall collaboration or maybe Arve Henriksen's recent Places of Worship, music that beguiles and insinuates its way into your sub-conscious until it feels as if it has always been a part of your life.

While it is too soon to say whether the new CD from bassist, band leader and composer Andre Carvalho will achieve a similar longevity in our affections it certainly has a gentle beauty that brings you back for repeat listens. Carvalho is a new name to me but clearly has a growing reputation in his native Portugal where his previous album, Hajime won the prestigious 2012 Carlos Paredes Prize in recognition of a contribution to maintaining a distinct Portuguese cultural identity. Paredes, was a celebrated guitarist who was imprisoned by the Salazar regime in Portugal for his membership of the Communist Party and is something of a cultural institution in his homeland.

The title Memoria De Amiba translates as Memory of an Amoeba, Carvalho's discovery of the apparent limited memory capacity of the single cell protozoa chiming with his own confessed absent mindedness. This is not just a good sleeve note anecdote as at times you can almost feel the way the musicians are able to drift away behind the soloist, each finding a sympathetic space as on the fantastic "Bleistift." This density and complexity of the instrumentation is why the music can take a few listens to open out and reveal its subtle charms—this is an album where the solo-ing is in support of the collective feel rather than a platform for individualistic fireworks. So while on the aforementioned "Bleistift" the excellent tenor saxophone from Ze Maria, augmented by Bruno Santos' studied guitar shimmers it is the ensemble that is paramount.

At times, such as during Santos solo on "Tadzio," it feels like the music is going through a mental checklist, groping for an elusive point or idea. The effect is a bit like perhaps listening to a flesh and blood version of a techno glitch, or maybe even the way Van Morrison would seemingly work himself into a trance state with repeated phrases back on the likes of "Madam George."

It is a very visual music—for example "Contemplacoes Do Panteao" is inspired by the views of the Lisbon Pantheon from Carvalho's apartment, or the way the two complementary harmonic themes of "Vi E Maria" interweave to suggest the dash and acceleration in play of the title's children. Another personal favourite is the opener "Chamada Nao Attendida"'s homage to distraction by the sounds that surround us in our lives. A couple of minutes in there is an interruption that is intended to represent the impact of a phone call on the concentration of the composer at home deep in thought. The sound itself is more subtle than this description allows—its far more like a softened version of the orchestrated call sound on Jimmy Webb and Glen Campbell's "Wichita Lineman" than an intrusive modern cell ringtone, but fits well with the filmic, soundtrack feel of much of the album.

But ultimately all that matters is that this is a collection of high quality, subtly melodic, atmospheric compositions that usher you into their own discrete world. It's not going to turn your world upside down, but for 65 minutes it might just make it a warmer, more gentle place.