Keigo Hirakawa Trio: And Then There Were Three

By MARK SULLIVAN
October 23, 2015
Sign in to view read count 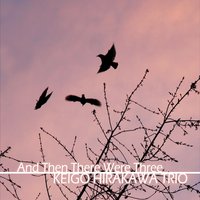 Pianist Keigo Hirakawa clearly loves bebop, and bandmates Eddie Brookshire (bass) and Fenton Sparks (drums) are on the same page. There's energy and swing in abundance here, and while it is contemporary jazz, it's also telling that their cover of the great bebop pianist Bud Powell's classic "Dance Of The Infidels" fits right in with the rest of the program. But there are certainly ample examples of more modern approaches. The title tune gives the lead line to the bass, as if demonstrating that this a true trio, not just piano plus two accompanists. The drums take the lead on "Sparks Plug," opening the tune and taking a solo later, and the sparks do indeed fly. "Minus Ten" has a bebop head, but there is also an extended free-sounding atmospheric section that is far from anything heard on a recording from the bebop era.

Hirakawa studied with a diverse group of jazz players, including Danilo Pérez, Stephen Scott (who contributes liner notes), and Ran Blake. He is currently on faculty at the University of Dayton in Ohio. Scott's liner notes draw comparisons to pianists Herbie Nichols, Herbie Hancock, and early Keith Jarrett. I hear a strong McCoy Tyner influence as well (especially on the opening "Myth of Poseidon"), probably due to his powerful left hand. So Hirakawa has a distinctive pianistic voice, coming out of a broad stylistic background.

The Powell cover appears towards the end of the set, bracketed by two other novel arrangements. "Daisy" features guest vocalist Wenbi Lai, singing the head as a vocalise: a refreshing addition to the trio sound. The closing selection is a solo performance of "Precious Lord," the famous gospel song written by Thomas A. Dorsey. Hirakawa's performance is remarkable for its dignity and restraint. He approaches the tune without any overt sentimentality or reverence, yet with obvious respect. It's a surprising—but effective—ending to the album.

Myth of Poseidon; Minus Ten; Cat On the Fence; Unmarked Path; And Then There Were Three; Is This Seat Taken?; Sparks Plug; Daisy; Dance of the Infidels; Precious Lord.

Title: And Then There Were Three | Year Released: 2015 | Record Label: Self Produced