The Two Al's: And the cowgirls kept on dancing

By EYAL HAREUVENI
February 18, 2014
Sign in to view read count 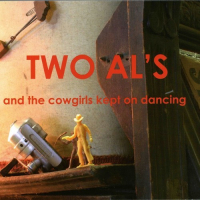 Both musician are experienced in solo and intimate, chamber formats with adventurous like-minded musicians from the vibrant, local Dutch scene as well as other innovative sonic explorers from other European scenes. Both worked in multidisciplinary formats also with theater groups and writers. Van Veenendaal refers to himself as 'pictorial musician' because of the epic and cinematic character of his music, while Purves focused on collaborations with free improvisers as cellist Ernst Reijseger, and British sax legend Paul Dunmall. Still, the focus on the mostly short 14 improvisations is not on strict investigation of new and inventive sounds but on harnessing both musicians highly singular languages in the service of new molds for alternative songs.

Few of these immediate songs have a fragile, story-like and highly cinematic narrative as the dramatic "Before the jump is over," the gentle and lyrical "Come in" or the enigmatic "It's now forever" and the resonant sound poem "To bet on bells." Others as "Unspun web" and the playful "New shoes blues" feature the richness of the percussive sounds of the prepared piano, with its assorted added wooden and metallic devices, and its organic interplay with the so-called authentic percussion instruments until it is hard to know which sound is produced from the piano and which from the other instruments.

The humor of the two musicians is an integral part of such a spontaneous and playful meeting. It is taken to absurd peaks on the concise title piece that offers new theatrical steps for a theme of a square dance, and on "Dutch delights" that makes you wonder if the Dutch really understand the concept of delight.

Nice to see you; Before the jump is over; An unspun web; New shoes blues; Clean up your own closet; Come in; Camel thurst; Tiny klompen; It's now forever; Tok the tok; And the cowgirls kept on dancing; To bet on bells; Dutch delights; Love story.

About The Two Al's