Ari Roland: And so I lived in old New York 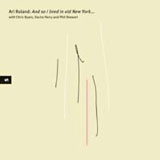 The great thing about listening to Ari Roland's And So I Lived in Old New York... is that it provides insight into the creative process and the way that simpatico among artists helps to form the final result. There are seven tunes on the disc, four of which are improvisations. Atypical titles like "Smile of the Swamp Thing and "Under the Salt of Stars exemplify the spirit of the band. Roland has played with saxman Chris Byars, pianist Sacha Perry and drummer Phil Stewart for years, and these musicians are so in tune that it's almost impossible to tell where composition begins and improvisation ends. The band is practically wood-shedding right before the listener's ears.

Most bassists who lead sessions are content to stay in the background with an occasional peek from behind the curtain for a solo. Roland, however, thrives on the bowed solo; he frequently hums over his arco, which sounds like a slightly off-mic recording of an active beehive. And his dazzling performance on "Under the Salt of Stars proves that he can also play pizzicato quite effectively.

This is 21st century jazz with a bebop mentality, which embodies the spirit and tradition of daring inventiveness. There may be more talented players out there but this group is perfect as a unit. As a result, this bassist, composer and US State Department Jazz Ambassador has added another fine chapter to his oeuvre.

For O.M.; Paerja; Perry Plov; Under the Salt of Stars; Byars-A-Carpet; Smile of the Swamp Thing; Blue Madi.