Trish Clowes: And In The Night-Time She Is There

By BRUCE LINDSAY
October 6, 2012
Sign in to view read count 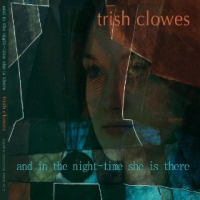 Shortly after the release of And In The Night-Time She Is There, her second album, saxophonist Trish Clowes became a BBC Radio 3 New Generation Artist, an honor that goes to the most talented young musicians from the worlds of classical and jazz music. Clowes is a worthy recipient, not least because she crosses the increasingly blurred line between the genres, as a player and composer, with a maturity of thought and a breadth of imagination that belies her relative inexperience.

Clowes' debut, Tangent (Basho Records, 2010), was an ambitious and rewarding album. For And In The Night-Time She Is There (a title taken from a poem by Oscar Wilde) she's joined by some of the musicians from that debut record. Bassist Calum Gourlay, guitarist Chris Montague and drummer James Maddren again join Clowes in the core quartet: pianist Gwilym Simcock, cellist Heidi Parsons and singer Kathleen Willison make guest appearances. Clowes' soft-toned tenor saxophone—which has been compared to Stan Getz and Bobby Wellins—remains central to her compositions.

Unlike her debut, while this second album doesn't feature a full orchestra, it does develop Clowes' ideas in ways that continue to fascinate, especially her amalgamation of classical and jazz players which she uses to bring some of her compositions to life. On the three-part "Iris Nonet," and "Animator," the group expands with the addition of Simcock and a string quartet—more accurately, as the sleeve notes make plain, an improvising string quartet. It's an important distinction, for the players not only have the ability to improvise, they also have the opportunity to do so, thanks to Clowes' imagination and vision. Clowes dedicates the "Iris Nonet" to her late grandmother, Iris Clowes. The varying moods and textures of the Nonet are funny, romantic, complex and sprightly by turns. The string quartet is a crucial part of this, bringing humor to "Iris Nonet—I" and tension and mystery to parts "II" and "III."

Much of the music is characterized by a gentleness of pace and melody. "Atlas" is particularly beautiful, Maddren's soft yet persistent brushed drums driving the pace. "Seven" features some lovely interplay between Montague's guitar and Clowes soft-toned tenor, as well as a fine solo from Gourlay. Parsons' insistent cello phrases add a little spookiness to "On/Off," contrasting with the placid beauty of Clowes' and Montague's contributions, while Willison lends "The Sphinx," a song based on the Wilde poem, a dreamlike quality which is further emphasized by Montague's flowing guitar solo and Parsons' understated cello.

"Little Tune" is a sweet duet between Clowes, at her most Getz-like, and Montague. Delicate, rich and romantic it's a beautiful performance from both players that shows their command of what might be termed "old school" jazz. Rounding off a richly rewarding collection of tunes, And In The Night-Time She Is There establishes Clowes' credentials as one of the most exciting of the new generation of contemporary musicians.

Title: And In The Night-Time She Is There | Year Released: 2012 | Record Label: Basho Records