Johnny Hartman: And I Thought About You 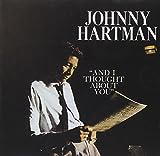 The world of jazz, much like life itself, is very often confusing and unfair. Artists that are widely respected and loved by their peers often fail to "make it big", while others that no one seems to care for very often rise to the status of superstars. But as in life, history often seems to have a way of using unusual means to deliver at least a measure of posthumous justice. In the case of vastly under appreciated jazz vocalist Johnny Hartman, history's unusual means of retribution comes with a name: Clint Eastwood.

Clint Eastwood? Clint Eastwood of Dirty Harry, Clint Eastwood? The very one. For the uninformed, Eastwood happens to be a very large jazz fan, possessing an enviable record collection and many classic jazz photos. In fact, Eastwood's debut as a film director was the Charlie Parker biographical film Bird . It was Eastwood, who while directing the film adaptation of the sappily popular The Bridges Of Madison County, loaded up the soundtrack to the film with torch gems by Johnny Hartman. The commercial success of the film exposed countless new people to the work of Hartman. The resulting solid sales of the soundtrack lead to a new generation of fans of the "Hartman sound." In an effort to cash in on this new fame for Hartman, Impulse and Blue Note dug into their vaults and reissued new collections of Hartman's work. It is in this vein that And I Thought About You has been reissued by the folks at Capitol Records, who secured the rights to this rare recording on the Roost label.

So why all the hub-bub about Mr. Hartman? Why the voice, of course. The swing of Sinatra, the smooth seductively of Nat Cole, and the baritone depth of Eckstein, all rolled into one. Hartman's voice is similar to a good scotch: clean and smooth, yet solidly powerful. On this collection of ballads and upbeat standards, Hartman wraps his voice around the lyrics like a thick, warm fog, surrounding the listener in the sheer beauty of his voice. Few singers have ever combined such emotion and expressiveness with such an ever-present sense of refined gentlemanness. That was the secret to Hartman's appeal: his singing was that of a man who understood the depth of emotion in his songs, yet never lost his refinement. An Ellintonian approach, if you will.

For this particular recording, Hartman was backed by an unnamed rhythm section of guitar, bass, and piano, with the bass often stepping out to take the melodic lead. A small section of reedmen also backs, changing instruments from song to song. The intimate setting seems a natural for Hartman, who is able to vary the intensity and volume of his voice with the emotion of the song, and not worry about singing "over" the band. The results are surprisingly consistent, with each selection getting a wonderful treatment. "I Should Care" starts softly before breaking into a seductively swinging bridge reminiscent of the Ellington "sound". "After You've Gone" swaggers in swankily and "Sunday" swings smoothly, while "How Long Has This Been Going On" and "I Thought About You" creep slowly through their familiar melodies allowing Hartman to play to his strength: smoothly, reinterpreting standards with style and seductive grace.

Overall, this disc is a must buy for the Hartman fan, especially considering the small number of his readily available recordings. For the uninitiated, this disc offers a great introduction to a sadly underexposed talent. A worthy addition to any jazz fans record collection, this disc is perfect for a romantic evening at home, or sipping cocktails on the porch. Try it and find out for yourself what Mr. Hartman is all about.

Title: And I Thought About You | Year Released: 1997 | Record Label: Roost