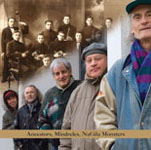 Although rewards can come from listening to a recording where mixing styles is done through patching different samples together, the music on Ancestors, Mindreles, NaGila Monsters radiates out of the mindful integration of several identifiable musical idioms within the same performance spectrum.

A child of pianist Burton Greene's 1989 band Klezmokum, the group Klez-Edge does more than blend traditional Jewish, Eastern European folk and improvised musics; it also equalizes them in terms that are spiritual, joyful, plaintive, humorous and political. The latter two characteristics are most effectively displayed in the titles of several songs and within the riotously amusing parody "Have Another NaGila Monster."

The structure of the band strongly influences an approach for hearing new sound mixtures. The tuba is an exhilarating bass component of the rhythm section that also includes a standard drum set, while the piano, clarinet and vocalist exchange places constantly as the main voices of the group. They each float organically through the other's substantial transparencies. When one voice moves ahead, it is to claim its own aural space, subsequently give entrance to another, and then become silent. The cadences are key to recognizing the nature of the musical material being explored.

Greene has composed or arranged all of the pieces with the exception of "Bagdad" (Perry Robinson) and "Prelude in D Minor for Andrzej" (Marek Balata). The transitions and main themes that Greene marks with the piano are stunning guideposts for absorbing the vocal and clarinet lines. His ability to move from charged chords, to minor keys, to dissonance, to playing music-box-like phrases—or merely suggest what will follow, then return to the theme—is downright arresting. An old-world cultural angst can be felt in the timing of every gesture, in every song, no matter the gentle twist that has been applied to the traditional thematic concept, as on "Odessa on the Hudson."

Tenor Balata uses his voice more as an instrument than to sing exclusively. In the opening "Mindrele," the syllabic content indicates a patent connection to Jewish singing, as its pattern lilts from one phrase to the next in a tone that is specific to the music. Balata carries this coloration generally through his scatting, departing from it most prominently in "Odessa on the Hudson," "Funk Tashlikh" and "Moldavian Blues."

Perry Robinson releases all inhibition on his clarinet to metamorphose into a soprano voice, wailing against or harmonizing with Balata or Greene. Robinson can also direct the progress of the musical line, pulling the tuba or piano with him—gloriously—as he does in "Ancestral Folk Song."

Drummer Robert Haliffi is completely comfortable in a jazz groove as he marches forward in "Funk Tashlikh" and "Moldavian Blues," yet he often accompanies synchronously and stroke-for-stroke with Greene, tubaist Larry Fishkind and Robinson when the traditional Jewish thematic material is the focus.

This music is a densely comprehensive expression of a belief in peace and blessings. Greene's bold statements are not growing any less iconoclastic, just more powerful.