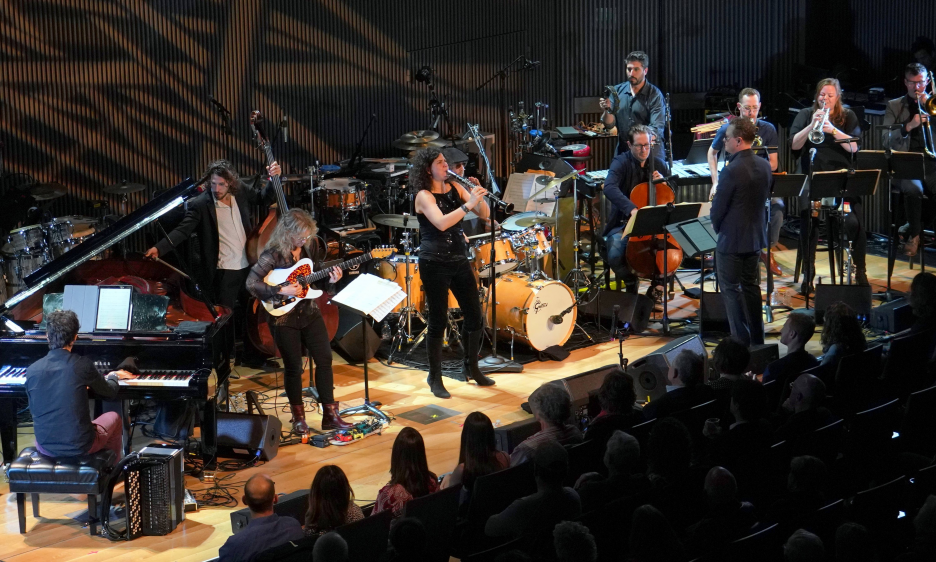 Swinging one moment, meditative the next. That typifies the style of clarinetist Anat Cohen. A native of Tel Aviv, the 39-year-old Cohen studied at Berklee School of Music in Boston before moving to New York City. Over the years, she has been recognized worldwide as an "Up and Coming Artist," "Clarinetist of the Year" and "Multi-Reedist of the Year." Cohen has also ranked in a number of critics' polls and was nominated for a Grammy in 2018 for both "Best Latin Jazz Album" and "Best World Music Album."

Cohen's musical influences range from Cuba's Los Muñequitos de Matanzas to John Coltrane "who has a spiritual influence," to Miles Davis to Dexter Gordon, as well as innumerable Brazilian artists including Milton Nascimento and Milton Nascimento [of whose songs Cohen has recorded a CD (Outra Coisa, Anzic Records, 2017)]. At Berklee, Cohen had first become enamored with Brazilian music, this led her to Brazil where she fell in love with its intoxicating choro music, which she has introduced to audiences worldwide.

Upon taking the stage with her Tentet at SFJAZZ for a Sunday afternoon concert, the synergy between her and the nine band members was immediately and abundantly in evidence. First up was Astor Piazzolla's composition "Milonga del Angel" followed by "Triple Helix," the new three-part concerto by musical director Oded Lev-Ari. Both tunes are featured on the new CD Triple Helix (Anzic Records, 2019), as were the next two tunes "Miri" and "Lonesome Train," a blues. Holding down the bottom were Tal Mashiach on bass, Anthony Pinciotti on drums and James Shipp on vibraphone and percussion. On "Loro" (from Happy Song: Anzic Records, 2017), Pinciotti employed his brushes skillfully, while Shipp offered beautiful and resplendent vibraphone solo. Nick Finzer soloed boldly on trombone, while Nadje Noordhuis offered a sweet and sparkling trumpet solo. Cohen came back in on clarinet to end the piece. Whether tapping on a triangle, eliciting handclapping or intoning on her clarinet, Cohen, as always was a spritely, lively presence on stage.

After calling the band, Cohen said "I'm very excited to be back here. We saw some people 'dressed' walking by (a reference to annual costumed run "Bay to Breakers"). It was very interesting... Thank you for coming out of the comfort of your home... I love sharing the stage with this band." The afternoon's final number, was Cohen's arrangement of Neba Solo's "Kenedougou Fol," also from Happy Song, where Shipp employed aluminum wrap on his vibraphone to mime the sound of the marimba for this tune from Mali. Things rapidly moved into high gear as baritone sax, vibraphone and a call-and-response between Cohen's lush clarinet and marimba all contributed to the heady percussive mix.

A standing ovation brought them back for a funky "Jimi" which featured a solo by guitarist Sheryl Bailey a band leader and professor at Berklee College of Music. Another standing ovation ended the evening.