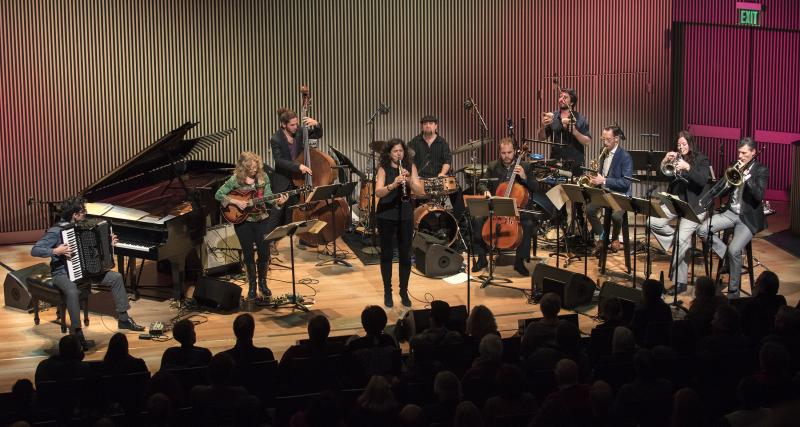 An evening with clarinetist extraordinaire Anat Cohen is an unforgettable experience. Residents of San Francisco were fortunate to see Cohen and her Tentet at SFJAZZ on a cool Sunday evening. A native of Tel Aviv, the 38-year-old Cohen studied at Berklee School of Music in Boston before moving to New York City. A decade ago, the Jazz Journalists Association awarded her both "Up and Coming Artist" and "Clarinetist of the Year." They have honored her as "Clarinetist of the Year" every year since then, and she has been voted "Multi-Reedist of the Year" three times since she was first awarded the honor by the Association in 2012. And she has also ranked in a number of Downbeat's readers' and critics' polls alike, taking the top title for clarinet every year since 2010, as well as receiving other awards and offers, including being nominated for two grammy awards.

Cohen cites influences ranging from Cuba's Los Muñequitos de Matanzas to John Coltrane "who has a spiritual influence," to Miles Davis to Dexter Gordon, as well as innumerable Brazilian artists including Milton Nascimento and Moacir Santos. At Berklee, Cohen had first become enamored with Brazilian music, this led her to Brazil where she fell in love with its intoxicating choro music, which she has introduced to audiences worldwide.

Her band is equally accomplished. The ensemble, clad largely in shades of black and grey, eased into "Happy Song," the title track of her new CD (Anzic Records, 2017) of the same name. Famous for her playfulness onstage, Cohen pranced about and played her horn before gifted pianist (and accordion player) Vitor Gonçalves stepped in with a lovely piano solo. Then the horn section (Owen Broder on baritone saxophone and bass clarinet; Nadje Noordhuis on trumpet and flugelhorn; and trombonist Nick Finzer)—along with cellist Rubin Kodheli and acoustic bassist Tal Mashiach—took flight with rhythmic fluency. Cohen swayed, captivated with the rhythms, before joining in a duet with vibraphonist (and percussionist) James Shipp.

"Valsa para Alice" had the feel of a tune Don Byron might compose and featured a fluglehorn solo by Noordhuis. An invocation by Cohen began the vibrant "Oh Baby" which segued into "Anat's Doina," the first of three tunes from "Happy Song." During these Gonçalves showed his stuff on accordion; Bailey and Kodheli offered guitar and clarinet couplings; Broder delivered with his baritone, while Noordhuis played her trumpet with gusto. A lovely cello solo led into a fast-paced percussion-driven jam with Shipp on tambourine which marked the end of "Anat's Doina." Sometime after the end of "Loro," a mysterious dark-clad figure took the stage to conduct parts of "Thrills and Thrills"; he turned out to be musical director Oded Lev-Ari. The pace slowed as Kodheli plucked his cello strings in tandem with Mashiach's cello fingering, while Shipp came in with tonalities from the vibraphone which resembled waves lapping at the shore.

Cohen, addressing the audience for the first time that evening, talked about the band's formation and how she had selected her musicians. "It's working out," she said and smiled. The next tune was Cohen's arrangement of Neba Solo's "Kenedougou Fol," also from Happy Song. This tune from Mali, the set's final number, rapidly moved into high gear. Baritone sax, vibraphone and Cohen's lush clarinet all contributed to the mix.

A standing ovation brought the band back for an encore: the lively" Espinha de Calhau," one of Cohen's beloved choros from Brazil. Gonçalves (a native of Brazil and an immigrant to the US who now resides in New York City) demonstrated his considerable skills on the accordion. The band linked arms around shoulders and faced the audience to receive a second standing ovation.