Anastasia: Before The Rain

By NENAD GEORGIEVSKI
August 5, 2005
Sign in to view read count 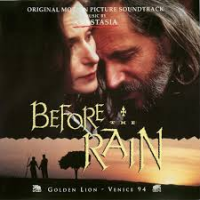 If one record could be singled out as a watershed moment of the '90s and a defining work of contemporary Macedonian music and culture, this would be it. This record really broke new barriers and set new standards. Before The Rain was Milcho Manchevski's debut movie, which won a Golden Lion at the Venice Film Festival in 1994 and was one of the front-runners for that year's Oscar for a foreign film. The movie tells the story of a burned out photographer returning from the war in Bosnia. Unfolding in three parts, Before The Rain explores the uncompromising nature of war which serves as a warning and a premonition; the director recognized the same seeds of violence in his home country, which eventually (several years later) led to the conflict that he dreaded.

The choice of soundtrack composer(s) shows Manchevski's impeccable intuition and taste, revealed again by his choice of former Bastion band mate Kiril Dzajkovski for the Dust soundtrack (a masterpiece in its own right). Prior to this work, the band Anastasia made a name for itself by composing music for numerous theatre plays and ballets. What their music brought to the film helped to elevate it to another level, intertwining the soul of the story with their emotional reaction to it. It seems as Anastasia has reached down to some deep place inside of them to create such strong music for this film. The end result was nothing short of a triumph.

The outcome was powerful and profound music with haunting beauty, and to many a watershed record of the '90s. Their instrumental palette features traditional instruments such as kaval, tapan, gajda, psaltir, and tarabuka, fused with electronic soundscapes and Byzantine chants and vocals. They used an old melodic vocabulary belonging to a rich tradition, but the language they spoke was new. The approach they took breathed new life into this tradition in a way that only few others can. It also features many guest appearances by important figures such as Dragan Dautovski, master drummer Kadrim Idriz and vocalist Vanja Lazarova, who is one of the greatest living exponents of traditional music and whose career would be revived by this record.

The album itself has a meditative feeling, and even though different moods prevail, the playing is lyrical, sensitive, and subtle. It opens mysteriously with "Time Never Dies," a track with a dreamy intro played on psaltir and distant clay pot percussion that suddenly bursts in the middle. And that sets the tone really for all that is to follow throughout the album. The beauty of it is captured both through simple but impressive melodies as well as dense and mysterious sound worlds and textures.

The real treat is the percussion work of Zoran Spasovski. Often shifting with the dynamics of specific tracks, he places strong and moving rhythmic lines underneath the melodies that are very engaging. But, it is Goran Trajkoski's unique voice that enchants the soul of the listener. Tracks like "Nine Iron Doors," "Passover," "Coming Back Home 2" and "The Circle is Never Round" truly serve as a playground for his majestic vocal style.

"Red and White is a folk tune sang by Vanja Lazarova and is based upon clay pot rhythms, bowels, chimes, droning synthesizers and backing vocals which serve as a fluid, rich and sonorous backdrop for the composition. The second track she sang on is The Death Of Alexander, which is actually another folk tune "So Maki Sum Se Rodil (With Sorrow I was Born (and in Sorrow I Will Die). Her voice is simply gorgeous and achingly beautiful while her vocal performances are astonishing, accentuating the tragic but poignant pathos of the film.

Not all of the tracks were composed exclusively for this soundtrack. "At The Restaurant" is a track borrowed from Zlatko Oridjanski's pre-Anastasia project Lola v Stain. Actually, it is Oridjanski and Trajkoski's first joint effort before Oridjanski joined Anastasia. The other track is "Passover" (Premin), a tour de force. The track was taken from their first release, the By The Rivers Of Babylon EP (a collectioner's item). "In a London Cab" is a solo guitar piece that simply captures and enchants the listeners with its sheer simplicity. It creates an aural portrait of sadness, brokenness, love and devotion.

"Coming Back Home 2" is another masterpiece where Trajkovski's voice is at its best; an interesting addition of gorgeous oboa sounds results in a dialogue between Trajkoski's chant and oboa's wordless singing. The closing track is a dynamic tune, "The Circle Is Never Round," based on the opening theme of "Time Never Dies." Trajkovski's voice is majestic as well as the polyphonic voices in the background on top of the percussion work provided by Spasovski. It is the perfect song to end this labyrinthine and complex, yet at the same time straightforward and simple film, features very much ingrained in and echoed by the music of Anastasia.

The release of Before the Rain and the subsequent tour meant closing a chapter. The next release Nocturnal took them to different territories, i.e. deeply into electronic music. As a group of artists who never rest on their laurels, the band never went into endlessly recycling the approach that made them successful. Ten years from its initial release, the music has kept its freshness, depth, and clarity. Before the Rain is a very special recording, something that can be enjoyed on many different levels. Just like a good book, it awards those that are patient and willing to stay with it until the last word.