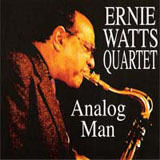 The opening two-note piano riff, the crisp rim shots from the drums and the walking bass line on the opening number and title track get Analog Man off to the most swinging of starts. Saxophonist Ernie Watts introduces the melody and proceeds to craft a solo so full of invention, strength and lyricism that when he lays out to allow pianist Christof Saenger his turn the surprise is that only three minutes have passed.

Watts' playing on "Analog Man is fluid and elegant and he raises the bar high for the musicians in his quartet. First pianist Saenger and then bassist Rudi Engel prove that they are up to the challenge of playing with one of jazz's premier saxophonists.

"Elements opens with drummer Heinrich Koebberling and Watts engaging in a highly charged duet, or rather duel, as the two seem to stoke each other's fire, recalling saxophonist John Coltrane and drummer Rashied Ali's sparring of forty years ago. Saenger maintains the tempo with a brief but lightning solo before the tune turns a corner and emerges into a short free-form, quasi-psychedelic passage with bowed bass, bird-like squawks from the saxophone and splashes of high register piano. Watts then steers the quartet into slightly more conventional territory but the tension never dips on the album's most ambitious track.

Saenger's beautiful "Paseando sees Watts switch to soprano , and his gently soaring, snaking solo evokes the magic of Wayne Shorter, one of his primary influences. Saenger responds with a solo full of blues, space and teasing runs.

There are three non-originals on Analog Man: French bassist Francois Moutin's "Clinton Parkview, Victor Feldman's classic "Joshua and, sandwiched between the two, Rickie Lee Jones' tender ballad, "Company. On "Joshua Watts plays some of his most inspired lines, a breathless, exciting and full-blooded tenor assault which sets the tone for his excellent quartet to follow.

It is the Watts originals, however, which stand out. "A Lilac Grows shows that the saxophonist can pen a ballad as well as anybody, and the soulful, uplifting melody and elegant playing again recall Blue Note-era Shorter. The quartet turns to the blues on "Gee Baby, which bounces and shuffles along propelled by Engel's bass line. Watts serves up a typically robust, colorful solo before drums and piano enter and swing the tune all the way home. "Morning Prayer succeeds in capturing the essence of the sacred, that indefinable beauty particular to so much devotional music; Patricia Watts on Burmese temple bells sets off her husband's heartfelt unaccompanied improvisations.

Analog Man is Watts' third quartet album on his own Flying Dolphin Records label and perhaps his strongest to date. Watts' writing and playing is better than ever. At least two tracks, the title track and "A Lilac Grows bear the hallmarks of instant classics, compositions which will inspire current and future generations of musicians, and there can surely be no higher compliment than that.