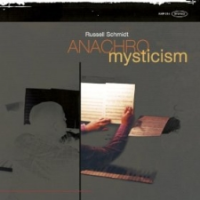 Pianist/composer Russell Schmidt takes acoustic jazz right to the edge of where it is supposed to be. Intelligent, melodic, and harmonically grounded, Schmidt's sound is fresh and invigorating. Schmidt is a faculty member at the School of Music, University of Utah. Anachromysticism is his second recording, following 2007's Season Of Change (Orchard Records). Where Season Of Change was a trio recording of standards, Anachromysticism is ten original compositions for a dual saxophone-fronted quintet.

Schmidt imagines music in competing tonal colors. The disc opener, "At Time's End" is a relatively straightforward piece featuring saxophonists Eric Rasmussen, and Brice Winston playing tenor. The two have their respective turns in solo, illustrating a certain sympatico. Schmid's chording is sound and consonant beneath the reeds and in his solo bisecting the tenor spotlights. The title piece is a sprawling nineteen-minute impressionistic examination that weaves in and out of avant-garde and free jazz at will. The composition has all the hallmarks of Ornette Coleman's '60s recordings, as well as recalling Jimmy Giuffre's famous free trio experiments of the same period. Schmidt establishes a tonal and harmonic center, but shows no fear in coloring well beyond the lines he has established. This is about as far out as Schmidt gets on a recording that has a bit of something for everyone.

At Time’s End; Anachromysticism; Descent; Conscience; Fortnight With Ferguson; Will She Be Revealed To Me; Bad Idea; Mediate; Percolate; Freeze Tag.