By Jack Bowers
September 24, 2017
Sign in to view read count 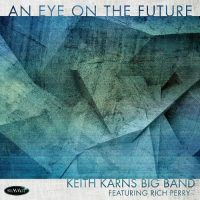 It's hard to know in advance exactly what to expect from a big-band album whose title is An Eye on the Future. Luckily, the horizon as leader Keith Karns sees it is rhythmically persuasive, harmonically alluring, acknowledges an indispensable bond to the past and swings like crazy. On this album, it's a tomorrow that also sets aside ample room for the prodigious talents of tenor saxophonist Rich Perry who solos on the first five of its seven numbers.

In summarizing the recording's purpose, Karns alludes to a statement by the late drummer Mel Lewis: "We are concerned with the future through the past." To that end, he has drawn inspiration from such renowned yet dissimilar composers and arrangers as Fletcher Henderson, Duke Ellington, Thad Jones, Bob Brookmeyer and Jim McNeely, among others, expressing the hope that "this tradition can be heard alongside our own voice." Indeed it can, in a series of lustrous charts that honor jazz tradition while exploring new areas of expression.

Karns and the ensemble open with the equivocally named "Two or Three Birds with One Bird," which apparently has nothing to do with the Bird also known as Charlie Parker but instead salutes "happy melodies" by presenting one of its own, a carefree theme that seems perfectly suited to Perry's evocative tenor voice (as do all the others on which he is heard). "An Eye on the Future," whose chorale-like preface clearly brings to mind modernists like Jones and Brookmeyer, was written by Karns when he learned he was to become a father for the first time, while the well-grooved "Thursday Club" is his homage to drummer Art Blakey and the celebrated Jazz Messengers.

Perry is the lone soloist on "Thursday Club," as he is on "Two or Three Birds," "Future" and Karns' outside-the-box arrangement of the standard "Like Someone in Love." Perry shares solo space with trumpeter Daniel Matthews, trombonist Connor Eisenmenger and drummer Connor Kent on the upbeat "Law of Contagion," then steps aside to make room for Karns (flugelhorn) and alto Devin Eddleman on yet another anomalous chart, this one on the Vincent Youmans standard "Without a Song" (on which Karns reshapes the familiar melody and inserts elements of Stravinsky's Petrouchka), and the brisk finale, "Crowd Control," whose genesis is in itself an interesting story (yes, it is included in the liner notes). Suffice to say the chart is based on Don Redman's 1926 composition "Stampede" and once again showcases Karns' nimble flugelhorn.

Sliding past Karns and Perry for the moment, it should be noted that the (presumably) Dallas-based ensemble is outstanding, sprinting easily through Karns' often strenuous arrangements with no discernible unease or miscues. If this does indeed represent the future, it is one that jazz aficionados should welcome with eyes wide open.

Two or Three Birds with One Bird; An Eye on the Future; The Thursday Club; Like Someone in Love; The Law of Contagion; Without a Song; Crowd Control.