An Evening With the Pops, Part II or, Louis Louis, We Gotta Go Now 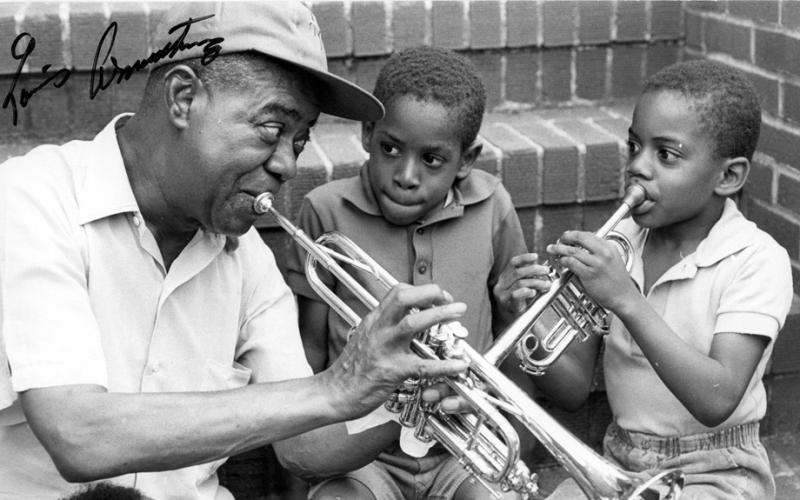 His brand of soft drink, Pop's Pop, was so popular that it inspired several other jazz musicians to launch their own signature beverages. Among them, Jack Teagarden's Tea and Bix Beiderbecke's Beer...

Well, kids, when last we left Louis Armstrong; he had solidified his place as America's first legitimate jazz superstar on the basis of his seminal recordings with his Hot Five and Hot Seven ensembles, was married to a legumicidal maniac and trusting his fortunes to a mobbed-up dandy who shared his neckwear with Al Capone. There was some nonsense about aliens and crabs, a veiled slam at the sorry state of modern celebrity, Canadians were somehow involved, and Prime Minister Ricci and I were still patiently awaiting our VIP treatment from the Baltimore Orioles Baseball Club.

That should bring everyone up to date.

By the thirties, things were changing for Louis. Separating from Lil in 1931, they would finally divorce in 1938 after an exhaustive best 11,500-of-22,000 game of rock-paper-scissors to determine the divorce settlement. Lil won half the rights to many of Armstrong's tunes, as well as the right to continue billing herself as Mrs. Louis Armstrong, on a disputed turn where she claimed she was only holding out one finger (the rare "dynamite beats rock" gambit) while Louis claimed that she was indeed holding out two fingers and rock beats scissors in any court in the land. Louis appealed the decision, but when a pivotal round of "eenie-meanie-meinie-mo" went against him he graciously accepted the defeat.

Meanwhile, Louis' alliance with Joe Glaser was beginning to pay dividends. Glaser had wisely teamed Louis with the Luis Russell Orchestra, a collection of former New Orleans musicians who made Armstrong feel at home. The group was renamed Louis Armstrong and his Orchestra (and musical director Luis Russell was renamed Bertoli Genovese), and toured almost constantly over the next ten years. Fortunately, this continual touring did not attract the same sort of smoked-up vagabonds later collected by the Grateful Dead, as the VW van had not yet been invented.

With the business end of his life taken care of, Louis could concentrate on other aspects of his professional life. His TV cooking show, Someone's in the Kitchen with Louis, failed because the only person with a television set was Philo T. Farnsworth, and the show had the misfortune of running opposite Farnsworth's favorite show, Philo's Sock Puppet Kabuki Theater. His brand of soft drink, Pop's Pop, was so popular that it inspired several other jazz musicians to launch their own signature beverages. Among them, Jack Teagarden's Tea and Bix Beiderbecke's Beer (later just Beiderbecke's, and finally, Becks. And now you know the rest of the story).

Louis also began to branch into movies. Beginning with 1931's The Ex-Flame, through 1969's Hello, Dolly, Louis generally tended to play either himself, or some thinly veiled version of himself. Much like Elvis, who played himself while all the actors around him pretended he was someone else, Louis was never in any serious danger of winning an Academy Award. But Brando couldn't hit forty-two consecutive high C's and then a high E-flat, so here we are.

personal life was also beginning to come into focus. Marrying Alpha Smith in 1938, the pair would divorce in 1942. Louis cited "lack of hipness and inability to swing" in his divorce petition. Alpha would counter that Louis' relentless desire to perform carried over into other aspects of their personal life and made it difficult for her to sleep or get any housework done. Make of that what you will. However, Louis would finally find the love of his life, the former Lucille Wilson, in 1942. The pair would be inseparable from that point until Louis' death in 1971, except for a brief period in 1964 when they were separated by doctors at Cedars-Sinai. They had to be rejoined when it was discovered that each of them only knew half of their phone number.

The forties saw Louis an established star, less reliant on the mercurial tastes of the pop culture masses and able to define his music however he saw fit. Even though his big band was one of the more popular in the country, he longed for the intimacy and immediacy of smaller ensembles. To that end, in the late forties, he began returning to small groups with the formation of a septet called Louis Armstrong and the All Stars (after the original name, Louis Armstrong and the Mostly Stars but A Few Regular Dudes proved too cumbersome for promotional literature).

Moving into the Fifties (at the far end of the block, near the Dairy Queen), we find Louis mostly at ease with himself. He toured the world, made the occasional movie, and recorded the music he wanted to record. Jazz itself is changing, along with the rest of post-war America, but Louis seemed above it. Now a genial father figure to jazz, he nonetheless became somewhat of a polar figure between black and white America. A genial showman who did not distinguish between high art that jazz had become and pure entertainment that it had once been, Louis at times found himself at odds with his own people and with much of the jazz community as well.

And here's where it gets complicated.

Derided by many critics for his decidedly unsophisticated and earthy personality, Louis had an innate comprehension'as Mark Twain and even William Shakespeare before him did'of the absolute necessity of humor to make genius bearable. Think about how abysmal the arts become when they lose the ability to laugh at themselves. Louis understood something his detractors could not grasp, that it is the grinning jaw of the jester which often speaks the truth with more razor-sharp relevance than the frowning maw of the most dire academe. And jazz, like humor, was born an outcast art that brought grace from hardship and magnified all that was good about the human condition to minimize all that was not.

The problem is that we are almost always more comfortable with greatness when it is suitably straight-faced and behaving in a manner befitting its station. Ring Lardner, the greatest humorist of the twentieth century whose satirical social criticism was in many ways more astute and prescient than that of more serious contemporaries Fitzgerald (not me, the other one) and Dos Passos, languishes in relative obscurity except when he crops up in the pale imitations of some distant acolyte (okay, me this time).

History has dealt with Louis by relegating him to two separate personas, as though entirely different men. There is the young, brilliant trumpeter of the almost sacred Hot Five and Hot Seven recordings, who changed the way the entire world listened to music and who now lives almost exclusively in the domain of the purist, the expert. Then, there is the mugging, clowning minstrel turned the nation's Official Ol' Pappy, the kindly sentimentalist guilty of crooning such pap as What A Wonderful World who exists now as almost the sole image of Louis in the popular recollection. And then there's this whole spectacle to be considered.

How to reconcile the two Louis's (Louises? Louii?). It is a disservice to Louis to approach him as either a holy icon or the clown prince of jazz. I prefer to think of him as a combination of the traditional Yin and Yang of eastern philosophy and the comedy and tragedy masks that have come to represent the theatrical arts. Could I have come up with a more complex metaphor? Stay with me, kids. Yin and Yang represent the eternal forces of light and darkness, separate but always in balance and always in an endless cycle, one inevitably following the other. Substitute light and darkness in that equation for comedy and tragedy (and while we're at it, substitute tragedy for the perpetually furrowed brow of Ken Burns).

In the end, you can not follow the solemn genius of Armstrong's music without eventually finding the boundless ebullience of Armstrong himself. And vice versa. Just like you can not follow the beer-soaked Genius of this column without eventually finding a leering mention of porcelain-skinned, left-handed, crimson-haired goddess Nicole Kidman. And vice versa, I could dare to hope.

That's all for this month, kids. Exit to your right and enjoy the rest of AAJ.