An Evening With Scott Hamilton & Friends 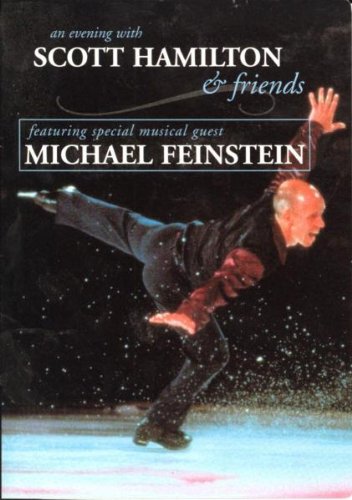 Two classy entertainers turn this television special and extended DVD into a musical moment that captures your full attention throughout. Michael Feinstein’s grand piano has been placed right next to the skating rink down front. With a small jazz ensemble, he sings from the American Popular Songbook, as a cast of professional skaters accompanies with lots of graceful visual action. He and skater Scott Hamilton host the event and provide a comfortable, up-close look at what makes music the universal language.

With sweater-vest and polka dot bow tie, Hamilton takes to the ice as leader and role model demonstrator. While his team of skaters is filmed at a live performance, they never falter. Every move seems to have been choreographed with the music. As with ice skating competitions, the performers “nail” their events with a “ten” every time out. Instead of listening to an announcer’s commentary on the skaters’ merit, the audience is treated to a live vocal performance with admirable instrumental accompaniment. John Oddo alternates with Feinstein at the piano bench, so that the singer can stand and face the skaters. Matt Catingub, Mark Vinci, and Tony Kadleck provide appropriate jazz statements with some spontaneity.

Skater Jozef Sabovcik draws upon the differences between what he’s used to in musical accompaniments and this evening’s scheme. Instead of the usual taped pop/rock music, he’s faced with Michael Feinstein and friends as his underlying, propelling force. Singer Darlene Love is then introduced as the prescription for what he needs. With “Cry Me a River,” she gives the skater an uplifting surge of what he figured was missing. The planned activity, however, misses the mark widely. Instead of giving Sabovcik a fiery blues-based backdrop, she sends him off with a rough-hewn take that lacks passion. His tall, long-legged frame works through a pre-planned performance without any hints of blues or rock spontaneity. While his ending, head-over-heels back flip serves to punctuate well, it merely reminds the audience once again that the event leaves almost no room for improvisation or spontaneity.

Feinstein’s take on “Great Balls of Fire” works much better. Skater Steven Cousins, with glittering gold sequins and youthful energy, lights up the arena with his twirling performance and hip attitude. Feinstein’s at his best on this one, imitating Jerry Lee Lewis while standing at the piano, and pouring out a fiery interpretation.

Together, the skating cast and musical cast combine their talents to produce a fine, multi-dimensional concert. Feinstein and Rory Flack Burghart recall Lena Horne in “Stormy Weather.” Darlene Love and skater Ekaterina Gordeeva interpret “A Sunday Kind of Love” with genuine passion. It’s one of the program’s high points. Both women bring their strengths together for this number, and convince easily. Both leave you thinking, “Wow, I didn’t know that an ice skating spectacular could turn out so warm and personal.”

Track Listing: I Love a Piano; Nice Work If You Can Get It; Where Do You Start; Smile; Up, Up and Away; Cry Me a River; The Best Is Yet To Come; Johnny One Note; Alexander’s Ragtime Band; Chopsticks; Great Balls Of Fire; Stormy Weather; Pig Foot Pete; My Favorite Year; A Sunday Kind of Love; You and I; Someone To Watch Over Me; It Don’t Mean a Thing; Only One Life; Ac-cent-tchu-ate the Positive.

Special Features:
Behind the scenes footage
Bonus tracks
Interviews with the stars