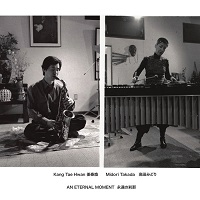 Thanks to Lithuanian label NoBusiness Records, Korean alto saxophonist Kang Tae-Hwan is reaching a new generation of improvised music lovers. Eternal Moment captures the one-of-a-kind saxophonist with Japanese percussionist Midori Takada in a live performance at Café Amores in Hofu, Japan, in 1995. It's the third previously unreleased recording from the Chap Chap Records concert series of the 1990s to feature Kang. Prior to this came the Ton Klami trio's Prophecy of Nue (2017)—with Takada and pianist Masahiko Satoh—and then the solo outing Live at Café Amores (2018).

Seventy-seven minutes of freely improvised music may be a demanding listening experience, but the subtleties of this duo's interplay are fascinating. Mantra-like rhythms, minimalist passages and ever-shifting dynamics work a hypnotic spell. The alto saxophonist's circular breathing enables extended improvisations, evidenced to spectacular effect on the forty-two-minute opener, "Syun Soku." From the outset Takada establishes a drum rhythm of pneumatic precision, over which Kang whittles sound—whinnying, gruffly braying, or maintaining high-pitched tones that evoke electronic manipulations. Gradual variations in Takada's patterns, both in tempi and intensity, provoke sympathetic responses from the saxophonist. Theirs is a highly attuned dialogue—a language apart.

Since the 1970s Kang has been renowned for his solo performances, and the fifteen-minute, unaccompanied "Solo" is representative of his art. In contrast to the more hedonistic breed of free-jazz practitioners—those whose solos border on the ecstatic—Kang's riffing chatter, overblowing and animalistic sounds are often surprisingly gentle. Even his wilder flights are tempered by folksy melodic currents, and in this constant vacillation between coarse and lyrical—practically without pause—lies an absorbing, indefinable sort of tension.

The duo reunites on "Dan-Shi," with Takada's bubbling marimba the backdrop to Kang's slower melodic flow, carved from sustained notes that flirt with dissonance. A counter rhythm—Takada employs four mallets—instills greater urgency as the saxophonist's kettle-like 'whistling' is replaced by high-tempo staccato riffing. At about the mid-way point Takada switches to drums and cymbals, alternating between metronomic pulse, tumbling cascades and, most effectively, a silence that hangs heavily and dramatically over the saxophonist's high-pitched, sustained notes. From a pocket of silence, marimba and saxophone then tiptoe around each other, though bar brief, scurrying runs from Takada, the steam has gone from their dialogue, leaving the duo to make the softest of landings.

The 2017 reissue of Takada's seminal minimalist recording Through the Looking Glass (RCA Japan, 1983) on the WRWTFWW label has generated renewed interest in the Japanese percussionist/composer. It is to be hoped that this fine series of archival releases from NoBusiness Records will do the same for Kang Tae Hwan.