Richard Shelton: An Englishman In Love In L.A.

By EDWARD BLANCO
November 17, 2015
Sign in to view read count 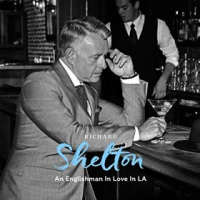 English-born actor Richard Shelton is a veteran of British theatre and television who recently moved to the United States for the opportunities that Hollywood may offer. As an actor, Shelton played the role of Frank Sinatra on the London stage in a play based on the book 'Rat Pack Confidential,' a dream come true for the actor who was provided with the chance to play his musical idol. Since then, Shelton has often been referred to as the "British Sinatra." An Englishman In Love In L.A. is Shelton's American debut album as a singer and recording artist intent on pursuing a musical career independent of acting.

His perfectionist attitude led him to insist that the album be recorded in Sinatra's "Studio B" at Capitol Records Studio where the actor/singer would be using the same microphone that captured the voice of the Chairman of the Board himself. In addition, along with assembling some of the finest jazz and industry musicians from L.A. among them, trumpeter Wayne Bergeron and saxophonists Eric Marienthal and Brian Scanlon, Shelton includes legendary bassist Chuck Berghofer, drummer Gregg Field and pianist Mike Lang, all of whom performed with Sinatra at some point in his career.

Shelton celebrates the "old blue eyes" style while also stamping his own unique imprint on this album choosing a thirteen-song repertoire with a decidedly British pop and classics flavor that also features two originals and a few standards from the Great American Songbook. The re-creation of the Sinatra flair here is so good that even the album cover—which shows the singer sitting at a bar—conjures up memories Sinatra singing the lyrics "so set them up Joe, I got a little story" from the Jonny Mercer/Harold Arlen Sinatra staple "One for My baby (And One for the Road).

Backed up by members of the L.A. String Orchestra and a nine-piece ensemble, the opening title track tells the story of the album, as stated in the press clippings "of a man longing for a new start in a strange land, excited at what lies ahead." Shelton not only resemble the legend, his vocal range is magnificent, able to reach the high notes with ease as well as caressing the lyrics when the emotion of the song calls for it as it does on the soft, slow tempo rendition of the classic Tom Jones song "It's Not Unusual."

Ray Nobel's immortal "The Touch of Your Lips" is just one of the stand out pieces of the album where the singer—along with a humbling solo from guitarist Andrew Synowiec—provides a beautiful performance on a beautiful song. Among the many terrific songs on this album not to be missed are, "My Kind of Girl," "Pure Imagination" and "Young at Heart." Richard Shelton is a superior singer who tips his hat to a legend with grace and elegance on An Englishman In Love In L.A. , an album that Sinatra himself would be proud of, well done!

An Englishman in Love in L.A.; It's Not Unusual; She Loves Me; And I Love Her; The Touch of Your Lips; Where or When; My Kind of Girl; Over Like the Roses; Young at Heart; For Your Lover Give Some Time; Pure Imagination; Smile; Dec 63' (Oh, What a Night).

Title: An Englishman In Love In L.A. | Year Released: 2015 | Record Label: Self Produced