By DOUG COLLETTE
October 27, 2018
Sign in to view read count 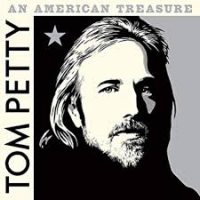 In a direct, no nonsense gesture the subject of this anthology would no doubt appreciate, the earliest inclusions on the 4-CD anthology An American Treasure illustrate how Tom Petty and The Heartbreakers forged their own style of songwriting and playing from Bob Dylan, The Byrds and Rolling Stones 99. "Surrender," "Listen To Her Heart," and" You're Gonna Get It" and, in one of the rare appearances in this set of a trademark tune in readily recognizable form, "Breakdown" also clarify that these musicians didn't borrow from these icons of contemporary rock and roll, but rather absorbed influences and integrated them.

The transplanted Floridians thus not only extended a grand tradition, but upheld it without compromise for the duration of their 40 year career. The 63 cuts that comprise An American Treasure document just how staunch they were in fortifying that larger legacy even as their creative body of work gave birth to a durable and expansive one of their own. Accordingly, it's tempting to peruse the track-by-track notes, edited by Bud Scoppa and largely authored by charter Heartbreakers guitarist /composer Mike Campbell and keyboardist extraordinaire Benmont Tench (who compiled this set with long time engineer/archivist Ryan Ulyate and Petty family members).

But adopting that approach, it's not long before the sound takes over and that's not just because of the expert mastering of Chris Bellman, one of Neil Young's audio gurus, who skillfully preserves the polish and the punch in the recordings. It's the action of the quintet, from the way piano and organ mesh into the chiming ring of guitar, to the brawny rhythm section that carries as much attitude as the leader's nasal drawl. Even in the finely-nuanced maturity of later compositions such as "Saving Grace," all the emotion in the singing is in the sound of the instruments on any given song, the band in full-tilt as if discovering the real pleasure in playing live music.

The lyrics, bound within hardcovers, are juxtaposed with a plethora of priceless and provocative photographs plus replications of lyric sheets and tape boxes, It's a true labor of love (overseen by the deceased musician's wife and daughters).

Died-in-the-wool fans of Tom Petty and the Heartbreakers, most likely will not rue the absence of "The Waiting" or "Don't Come Around Here No More," but instead welcome a version of "I Won't Back Down" sounding less like an anthem than an internal musing. And while those discerning musiclovers will no doubt deeply savor An American Treasure because its elevated level of conception and execution is wholly in line with the artistry of the musician(s) to whom it's devoted, it will nevertheless whet their appetites for future sets, perhaps devoted to concert recordings.

CD 1: Surrender; Listen To Her Heart; Anything That’s Rock ‘N’ Roll; When The Time Comes; You’re Gonna Get It; Radio Promotion Spot 1977; Rockin’ Around (With You); Fooled Again (I Don’t Like It); Breakdown; The Wild One, Forever; No Second Thoughts; Here Comes My Girl; What Are You Doing In My Life; Louisiana Rain; Lost In Your Eyes. CD 2: Keep A Little Soul; Even The Losers; Keeping Me Alive; Don’t Treat Me Like A Stranger; The Apartment Song; Concert Intro; King’s Road; Clear The Aisles; A Woman In Love (It’s Not Me); Straight Into Darkness; You Can Still Change Your Mind; Rebels; Deliver Me; Alright For Now; The Damage You’ve Done; The Best Of Everything; Walkin’ From The Fire; King Of The Hill. CD 3: I Won’t Back Down; Gainesville; You And I Will Meet Again; Into The Great Wide Open; Two Gunslingers; Lonesome Dave; To Find A Friend; Crawling Back To You; Wake Up Time; Grew Up Fast; I Don’t Belong; Accused Of Love; Lonesome Sundown; Don’t Fade On Me. CD 4: You And Me; Have Love Will Travel; Money Becomes King; Bus To Tampa Bay; Saving Grace; Down South; Southern Accents; Insider; Two Men Talking; Fault Lines; Sins Of My Youth; Good Enough; Something Good Coming; Save Your Water; Like A Diamond; Hungry No More.