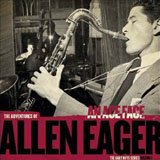 Allen Eager was one of those swing-through-bop tenor saxophonists who seem to have walked this earth in abundance in the late 1940s. An Ace Face is a two-disc set from that period, chronicling work both under his leadership and as a sideman. Within the canon of those players Eager was arguably the one who got closest to bop's creativity. He is thus further "out than, say, Flip Phillips, whilst he lacks the individuality of someone like Lucky Thompson.

He's certainly "out-bopped by Serge Chaloff on Al Cohn's "The Goof And I," recorded under trumpeter Red Rodney's leadership in January of 1947, but in that there's no disgrace. Few sax players apart from Charlie Parker himself got further inside the bop vocabulary than Chaloff did.

Eager makes more than a lot of his contemporaries would have of "Sweet Georgia Brown," and even manages to make it sound like something other than a staple. Having said that, once he's within the ranks of a Buddy Rich orchestra, as he is on "Nellie's Nightmare," his solo seems to act only as warm-up for the leader's usual display of drumming pyrotechnics. He's relatively restrained on this occasion.

Eager's predilection for what was then the new music comes to the fore in his work with a Tadd Dameron sextet. His work on "Anthropology" is on a par with that of ill-fated trumpeter Fats Navarro, both men burning with the intensity of true converts.

It's on the second disc that Eager seems to come more into his own, however. As a member of both a septet and quintet led by trumpeter Tony Fruscella something different and distinctly his own starts to emerge in his playing. His solo on "Salt" is a model of economy that's the product of a whole lot more than concern with the ticking of the studio clock, and whilst his phrasing is distinctly his own it stays on the right side of willful eccentricity. The not-always-useful benefit of hindsight reveals also how Fruscella fused Chet Baker's limpid style with something entirely his own, as demonstrated on his solo on "I'll Be Seeing You."

On "Metropolitan Blues" Eager puts out the message in uncommon fashion, his balance of the urbane and the trenchant amounting to something entirely his own, and the impression is underscored by his work on "Old Hat," where his tendency to phrase ahead of the beat singles him out amongst the crowd of Lester Young disciples despite any tonal similarity.

To this day it can be argued that Allen Eager is a neglected figure. If this is the case it might be down to something his work has in common with Lucky Thompson. Both men plotted a singular route through a musical upheaval and, as a result, have always avoided easy pigeonholing. This set is thus addressing a major imbalance.