Amy, The Movie: The Pure Artist, the Singular Voice, and the Fragile Heart of Amy Winehouse

Winehouse's sound and the album Frank were clearly shaped by her love for jazz, a vocal style that hints of Billie Holiday meets Shirley Bassey. 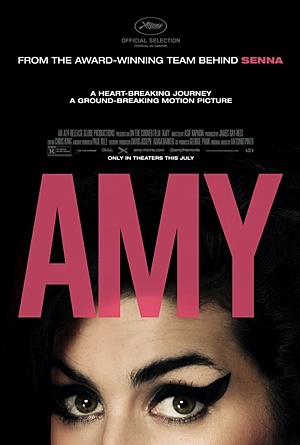 I attended an advance screening this week of Amy, the Amy Winehouse documentary that was co-sponsored by the National Academy of Recording Arts & Sciences (GRAMMY) and the New Orleans Film Society. The movie hits the theaters Friday July 10, 2015. While the inevitable, tragic ending of the narrative and the roller-coaster ride that is the struggle to overcome addiction cast a heavy aura over the movie-going experience, the film paints an extraordinary palette of emotions, insights, and song. The secret sauce to the unfolding of the story comes from the use of intimate video snip-its provided by family and friends that allow the audience to walk alongside the jazz-pop-R&B crossover artist through every step on the path to creative introspection and development, success, fame, personal relationship challenges, emotional distress, and ultimately tragedy.

Yet the overriding emotion is one of appreciation for the purity of the voice, the artistry, and the vulnerability of the fragile heart that was Amy Winehouse. Her insecurities were evident from her earliest days as a songwriter, when she would profess to be working only on a little poetry while her musical confidants knew she was writing complete songs. Perhaps the great irony was that Winehouse never sought the fame and unrelenting tabloid media harassment that accelerated her demise. Her stated objective that seemed plausible based on her introverted behavior was simply to be able to compose and perform her own music her own way, without the influence of image conscious music executives. What makes her meager catalog of music so compelling is that it is a virtually unfiltered reflection of the emotion of the artist.

The Winehouse family, and in particular her father Mitchell Winehouse allowed movie makers tremendous access to personal footage and materials, yet have since become highly critical of the film, primarily based on the portrayal of the family patriarch as a parasitic freeloader more intent on exploiting his daughter's fame to launch his own career than ensuring her well-being. Winehouse's mother Janis, when Amy conveyed to her a wonderful new "diet" of bingeing followed regurgitation, naively dismissed it as a passing phase of a teenager rather than signs of bulimia. While the editing room can sometimes serve the interests of a biased director, opinions here are primarily shaped through direct interviews with those closest to the artist, leaving one skeptical that there was any agenda other than the unfolding of the truth.

Blake Fielder-Civil, Amy's ex-husband doesn't fare much better in the court of moviegoers opinion. An addict who helped introduce Winehouse to an increasingly volatile cocktail of dangerous drugs, Fielder-Civil allegedly hindered an attempt by a qualified addiction recovery expert to allow her to attempt rehab without him. Instead the couple found a facility willing to take them on as a duo, a practice that one specialist characterized as ill-advised, bordering on unethical.

After all is said and done, addiction and mental health are complex issues and the blame game is futile in retrospect. The sad irony cannot be ignored -We as music consumers showered praise and awards upon a delicate young lady during a brief respite of a downward spiral as she performed a song on the world's largest musical stage (the 2008 GRAMMYS) -The topic non-other than her refusal to go to "Rehab." A world of enablers can shoulder some measure of responsibility.

While there were no heroes in the film given the somber ending, there were heroic efforts by a small groups of Winehouse's closest friends from her early days to save her from her tragic fate. The most poignant and insightful footage and story lines come from her time with manager Nick Shymansky, whom she met when she was only 16, and who remained in that capacity until the release of her first album Frank. Playful videos of automobile rides to small venues or shopping around demo tapes to record executives give a real sense of the joy of musical discovery, true friendship, and innocence, long before the grips of stardom and its trappings, both physical and emotional, took hold of her.

Perhaps the most compelling testimonials in terms of credibility as an artist came from the legendary Tony Bennett, with whom Winehouse recorded "Body and Soul" for his Duets II album. Winehouse's sound and the album Frank were clearly shaped by her love for jazz, a vocal style that hints of Billie Holiday meets Shirley Bassey. She's clearly and genuinely in awe of Bennett, and the footage of their recording session hints of a sweet girl still struggling to become comfortable in both her accomplishments and success.

"One of the truest artists I've ever heard," said Bennett. He added that had she survived to put together a larger body of work, she would have been in the class of Ella Fitzgerald or the aforementioned Holiday. While his affinity for Amy, his professional connection to her, and his respect for the deceased might cause Bennett to be overly lavish in his adulation, those are still stunning comparisons and can't be dismissed given the credentials of the source.

And again, it's the film's ability to capture the complete picture—the warmth, heart, and authenticity of Winehouse's music and personality that makes this movie so compelling. So many music biopics fall short of the lofty goal of capturing the true essence of the artist due to laziness or incompetence. Some musical biographies get dragged down in the untold gossip and result in simply a tell-all tale. Others are the result of merely having a camera crew tag along on tour and become a simple live concert hodgepodge with a smattering of backstage antics. And there are those that fail to walk the fine line of celebrating the success and documenting the demise in such a story, either turning dark and hopeless or annoyingly cheerful. Amy avoids those pitfalls and shines with the right balance of music, story, first-hand accounts, artist interviews, and of course music.

With such a fleeting life and career and a limited body of work, there's likely a substantial potential following that hasn't yet discovered the Winehouse tale nor her music. The enduring power of film should serve as a catalyst in broadening that Winehouse audience and immortalizing her, in much the way Marilyn Monroe and James Dean's legendary fame outpaced the volume of their work. In the end, the audience is left extrapolating her career and trying to surmise her potential impact, while cherishing the morsels of music and lyric that have been rationed to us.