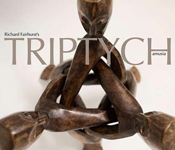 Amusia is the first album from Triptych, an international trio led by English pianist Richard Fairhust and also featuring Danish bassist Jasper Høiby and American drummer Chris Vatalaro. It's an impressive display of inventiveness and musicality.

This is a virtuoso lineup. Fairhurst recorded his first album with the Hungry Ants in 1995 at the age of 20, and has been a Steinway International Artist since 1998. Høiby and Vatalaro are two of the most distinctive and in-demand young rhythm players on the scene, while Høiby leads his own highly-regarded band, Phronesis. Together, they create a set of tunes centered on Fairhurst's lightly percussive piano and driven by Høiby and Vatalaro's rhythmic attack. Fairhurst takes writing credit on all of the tunes, sharing one with Høiby, while two others are trio compositions.

In fact, it's Høiby who begins the album, with a typically percussive bass opening to "Amusia." The rest of the tunes follow on in an unpredictable array. "Bouts of Agony" is a lovely solo piano tune, showcasing Fairhurst's delicate and lyrical style—shame about the title, though. By contrast, "Confused Wasp," another Fairhurst solo piece, is more angular and unpredictable, as its title suggests. This sense of angularity, of sharp twists and turns in rhythm and melody, also runs through "Sticklebacks"—a trio composition that sees Vatalaro's unusual percussion at the front of the mix—and "Scourge."

"Daringly Poised" is a more playful piece which weaves stylistically from free form to marching band to circus music and back again, thanks especially to Vatalaro's varied and innovative percussion. Høiby's bass is a key element in the trio, but its sound is rarely to the fore. When the instrument does move up in the mix, Høiby's hard-edged playing is demonstrably fine. His reentry, two minutes into "Dense Fur," completely changes the tune's mood and pace, while his playing on "Love and Light"—the Fairhurst and Høiby co-composition—is beautifully restrained and emotive.

Although Fairhurst can lay claim to the bulk of the writing credits, Amusia feels very democratic in its performances, as the band's name suggests that Høiby and Vatalaro are equally critical to the album's success and can never be considered as merely sidemen. This is a fresh and involving album, where humor is a key and welcome ingredient, and establishes Triptych as a strong and credible musical unit.