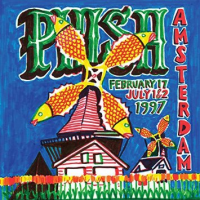 Delving in sequence into this eight CD set of the shows recorded in February and July of 1997, it sounds like the band really takes flight during "Timber" from the initial show. But Phish shows from throughout their history inevitably exhibit a relativity of momentum, the dynamics of which are dependent upon, but not limited by, context.

Because after the good-natured and relaxed greeting the quartet offers with "Soul Shakedown Party," it's not long before they make a seeming quantum leap of intensity from "Divided Sky" into the teeming segue of "Wilson" into "Guyute."

Phish had something to prove, to themselves and their audience, after the somewhat misshapen proceedings of their first visit to the European city and they wasted no time in getting to the point they wanted to make, and it wasn't just "we're better than that!" but "This is how good we can be!"

So if set two at the Paradiso looks and, more importantly, sounds remarkably like present-day live Phish, that's not an accident. The inclusion of "Down with Disease," "Suzy Greenberg" and "Prince Caspian," like the band's archive releases in general, have become means of ever-so-emphatically, albeit ever-so-subtly, stating how they've reinvented themselves over the years, by simply allowing the music to speak for them.. Their efforts are as well-coordinated with coincidental current activities as are the graphics of packages like that of Amsterdam, inside and out, stylish in their own rudimentary way.

Phish don't play the intimate likes of the 1500 seat Paradiso these days, but they funk it up just as earthily as the "Ghost" opening from the first of two July shows and perhaps more so: it isn't just Anastasio's guitar that's got more heat since Hampton 2009, bassist Mike Gordon is all the more assertive, although deceptively (and slyly) so. Which is why and how, in part, the band ascends from this intricate syncopation to high-altitude flight in twenty-plus minutes, turning this performance into one of benchmarks by which Phish shows are measured (and no doubt calibrated for release like this title).

Fred Kevorkian's mastering of Paul Languedoc's original recordings ratifies the group's decision to be documenting the shows for that purpose, which in fact pales next to the sensation of becoming immersed in the depth of sound. And apart from reaffirming the durability of the Phish repertoire, titles such as this foreshadow the future in oddly thought provoking ways: hearing this economical arrangement of J.J. Cale's "Ain't Love Funny" is as credible an expression of (comparatively) young love as it might be for Phish to dedicate it these days to their spouses. "Saw It Again" seems at least twice it's seven-minute length as keyboardist Page McConnell's synthesizer work pre-dates "The Island Tour" as much as "Dirt"s lyrics connect directly to "Time Turns Elastic." Meanwhile, the droning electric guitar is as reflective and self-aware of the influence of the Beatles as "Ocelot."

It's hard to imagine an audience remaining in such quietly rapt attention as does this one July 1during the near silent passages of the far-reaching jam constituting the bulk of Talking Heads' "Cities." Far from overextending the resources of the band or the attendees, these passages are in fact a launching pad for the headlong homestretch comprised of the Rolling Stones' "Loving Cup," and the band's own set-closing signal "Slave to the Traffic Light" the magnificent melancholy of which echoes through the encore of Los Lobos' "When the Circus Comes," which in itself is a piece of self-reference hard to miss at the time and now with twenty-eight years hindsight.

Hearing Amsterdam start-to-finish compels comparison to their other archive releases, most particularly Chicago '94 (Jemp, 2012). And yet by the time the final three discs roll around in a chronological playing, containing the final Dutch concert in its entirety, likening this set to the Grateful Dead's The Complete Winterland Recordings 1973 (Rhino, 2008) becomes inevitable because of the flow of the playing throughout: within sets, entire performances and the run as a whole.

But by the time Phish begin to pirouette around within "Weekapaug Groove," it seems light years from the "Simple" to "Maze" segue almost as if "Strange Design," "Ginseng Sullivan," "Vultures" and "Water in the Sky" never happened. Quite probably, the thought occurred, in the collective mind of Phish that, at this threshold of completing the run, they've made the point and redeemed themselves.

While the pace flags somewhat by the time "Wading in the Velvet Sea," concludes, it is altogether remarkable the way the band regains its drive by charging through multiple changes during "Free," weaving in and out of each others' instrumental lines, the perpetually redoubtable drummer Jon Fishman acting as the fulcrum. The patience and poise Phish display at times like this are invariably mirrored in the level to which their audience pays attention, that mutual connection the foundation of the community in action on Amsterdam.