By MARTIN LONGLEY
March 8, 2010
Sign in to view read count 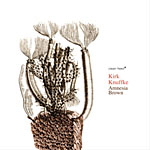 Amnesia Brown was the name bestowed upon trumpeter Kirk Knuffke's absconding not-so-great grandfather. Apparently, he just sidestepped to a nearby town (and a new family), changing his name on the way. It's not quite clear how his memory (or lack of it) informs the repertoire of this album, but he also happens to provide the fourth track's title.

This trio has its roots in the Nublu Orchestra, which regularly plays a Monday night residency at the East Village club of the same name in New York City. Knuffke is joined by drummer Kenny Wollesen and Doug Wieselman, the latter alternating between clarinet and guitar. This is an extreme instance of instrumental oscillation and these switches do much to impose completely opposed characters whenever Wieselman swaps roles. On clarinet he's darting and capering lightly around the composer/leader's bright constructions; on guitar he'll darken the proceedings into a rusted reverb wire-tangle, chopping and clipping with untamed aggressiveness.

The pieces are two, three, maybe four minutes long, so Knuffke is able to include 16 tracks, providing ample opportunity for a feast of compressed melodic adventuring. The three revel in their own sound, but the nearest approximation can be conjured up by imagining a fantasy supergroup that alternately pools the talents of Jack DeJohnette, Ed Blackwell, Jimmy Giuffre, John Surman, Kenny Wheeler and Don Cherry.

Knuffke is a clarion cutter, dotting out detailed flurries. He's never less than scintillating. "Red Bag" is savage and broken, an angry burst, then "Leadbelly" sets up a marching groove, almost heading down to New Orleans on its rolling pathway. "Hears It" is particularly manic, followed by the serene "Totem," which transforms into an urban funk rumble. "Need" is a spidery slope, "Narrative" is contemplative, "Please Help, Please Give" rages. All of these natures belong to Knuffke and his cohorts, exposed with sensitivity or pugilism according to the rapidly-shifting moods of these refreshingly pointed strafes.