America At The Paramount 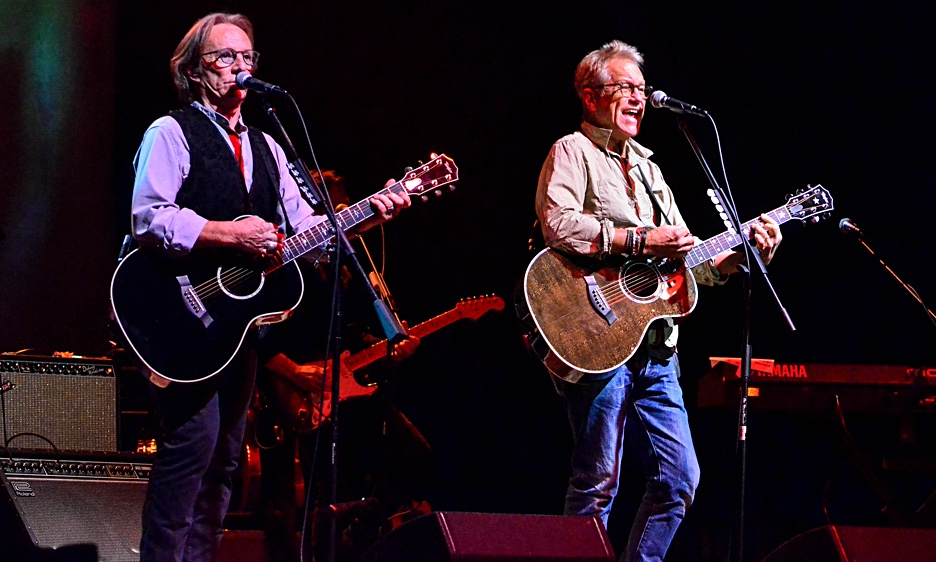 America was formed in Britain in 1970 when, shortly after graduating high school, Dewey Bunnell, Dan Peek, and Gerry Beckley (each the son of U.S. Air Force personnel in London) began to play together. A recording contract soon followed. The band achieved almost instant popularity and produced a folk-rock sound that received significant airplay on many rock radio stations. Its debut album America (Warner Bros. Records, 1971) included the worldwide hits "A Horse With No Name" and "I Need You." The band's next release, Homecoming (Warner Bros. Records, 1972), featured "Ventura Highway." 1974's Holiday (Warner Bros. Records) featured the hits "Tin Man" and "Lonely People," and Hearts (Warner Bros. Records, 1975) featured "Daisy Jane" and the number one single "Sister Golden Hair." In 1982, despite Peek's departure five years earlier, America released View From the Ground (Capitol Records) which featured the hit single "You Can Do Magic."

The band continues to record, releasing its 18th studio album Lost & Found (America Records) in 2015. Lost & Found featured the tune "Driving," which has become a regular part of the band's concert set list. In 2000, Rhino Records released Highway: 30 Years Of America, a three-CD box set featuring songs spanning the group's career. Throughout the early 2000s, there was speculation that Peek would rejoin the band. Those rumors ceased when Peek passed away in 2011. America won the Grammy Award for Best New Artist and was nominated for Best Pop Vocal Group at the 15th Annual Grammy Awards in 1973. The group has also been inducted into the Vocal Group Hall of Fame and received a star on the Hollywood Walk of Fame.

On a sleepy Friday evening at the Paramount in Huntington, NY, it was apparent that even after almost fifty years, America has not lost a step. Bunnell and Beckley were joined by bassist Richard Campbell, drummer Ryland Steen, and Steve Fekete on guitar and keyboards, proceeding to blow the doors off of the sold-out venue.

Though America has been classified by many as solely a folk-rock outfit with lush harmonies, that is only part of the equation. America is a rock band. The evening's performance proved that without a shadow of a doubt. The players delivered sharp, tight, and driving rock 'n' roll with taut leads, powerful backbeats, and infectious harmony. The show, which was part of what is being labeled as "The 50th Anniversary Tour," was definitely a greatest hits show. It was a crowd- pleaser from the opening notes of "Tin Man" through the closing tune. The performance delivered everything that fans could want.

The band treated the middle-aged crowd in the packed-to- the-gills, mid-sized venue to exactly what they came for: an evening of fun, '70s-drenched singer-songwriter rock. Beckley and Bunnell were in fine form as they played a set of favorites and two well-chosen covers, The Beatles's "Eleanor Rigby" and The Mamas & The Papas's "California Dreamin.'" That night, the band played twenty-two songs.

In addition to the tasty covers and opening and closing numbers, Bunnell, Beckley and their band played the songs that made America famous: "You Can Do Magic," "Don't Cross the River," "Daisy Jane," "I Need You," "Ventura Highway," "Only In Your Heart," and "Lonely People." The band also delved into its catalogue to perform deeper album cuts including "Riverside" (the first track on the debut album), "The Border" (from the 1983 Capitol Records release Your Move), "Survival," "Greenhouse," and "Cornwall Blank/Hollywood," which Bunnell and Beckley categorized as being "dangerously close to jamming!"

Bunnell and Beckley delivered their songs in a very fan- friendly environment. They augmented the performance with insights, humor, and stories about themselves and the band's history. The duo paid homage to producer George Martin, talked about its origins in England, about other artists' musical styles, seeing Jimi Hendrix perform, and America sharing a bill with The Beach Boys and The Mamas & The Papas, with each band including "California Dreamin'" on its set list—but, as Beckley noted, "We were on first!" The show came to an end with a fan favorite and crowd-pleasing combination of "Sandman," the high-energy "Sister Golden Hair," and, what else, "A Horse With No Name."

Four decades after its most prolific period, America continues to deliver powerful, uplifting, mesmerizing, irresistible, and timeless music that will never go out of style.