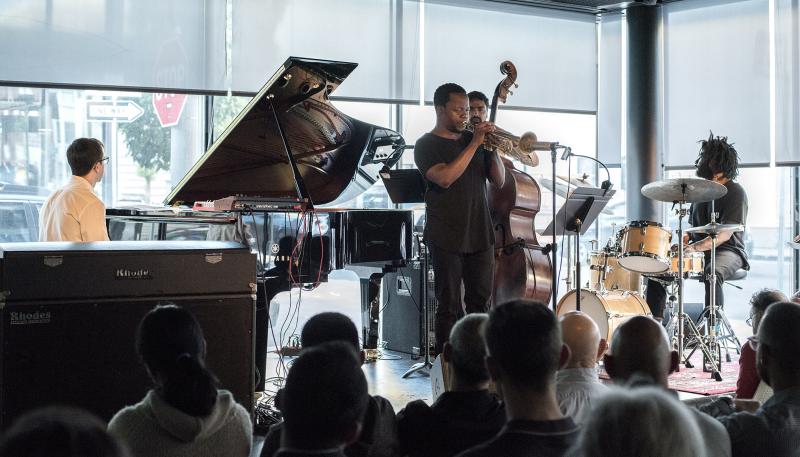 For trumpeter Ambrose Akinmusire, the band is everything: "When I'm playing with other people, it's hard to produce, because I don't have that relationship. But when I play with my band, it's endless," he told the New York Times in March 2011.

Akinmusire has been playing with drummer Justin Brown since they were 14 or 15 years old; they grew up together in a rough-and-tumble part of Oakland, California. "There's a long history of trumpet and drums together, so it's been great to grow up and develop with a drummer as fantastic as him," Akinmusire enthused. Akinmusire has known pianist Sam Harris and bassist Harish Raghavan, a north Illinois native, since the mid 2000s. "Sam and I went to Manhattan School of Music together. Every time I heard him he would sound completely different... He's so curious and he's always studying. Harish and I met when I was at the Thelonious Monk Institute. He's the instigator of the band.... he's improvising and thinking about melody and many times coming out of his register."

As they form a cohesive unit, it is not surprising that Akinmusire called the band at the start of his two sets at SFJAZZ or that he did so several times during each set. Years of musical camaraderie were quite evident in terms of the unit's cohesion. Stepping onto the stage, the black-clad Akinmusire offered both subtle and fast-and-furious trumpeting, complimented by Harris' sweeping piano and the dreadlocked Brown's intrepid, take-no-prisoners drumming. From the first, Raghavan proved to be a force of nature on the bass. A round of cymbals marked the end of the first piece, while an elaborate piano solo from Harris began the second. Things then slowed down as Akinmusire, complimented by some extended cymbal work, blew some extended tones to commence "A Moment In Between the Rest (to curve an ache)." Then the ensemble charged in.

So it went for the remainder of the evening. Subtle interludes metamorphosed into extended, hard-charging, frenzied excursions. Brown showed eloquence with his bristles and his mettle on the sticks. Harris, played with sleeves rolled up, his hands cascading up and down the keys, executing several solos.

Akinmusire imagines "A Song to exhale To [Diver Song]" as the "soundtrack" to "a diver with scuba equipment going down really slowly." Raghavan played a lovely bowed intro on the bass as we began our descent to the depths. A frantically fingered bass solo, executed by carefully reading the notes from the page on the black stand in front of him, enlivened "The Condor," a composition from A Rift In Decorum: Live At The Village Vanguard (Blue Note, 2017).

Frantic or subtle, all the Akinmusire compositions had one thing in common: they developed and progressed as opposed to repeating. The tone of his playing changed like the weather, as did the timbre of his versatile band. All this bodes well for the future of this talented trumpet player and his talented associates.