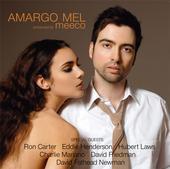 Meeco is a rather young musician who appears drawn not simply to the musical idioms of jazz, popular music and a myriad of those in the Latin tradition; he also set out to do what musicians of his age seldom attempt: he's made a troubadour record. Amargo Mel is a very difficult project to pull off, even with a stellar cast including pianist Reggie Moore, bassist Ron Carter, trumpeter/flugelhornist Eddie Henderson, the late tenor saxophonist David "Fathead" Newman, altoist Charlie Mariano and trumpeter Mario Morejon, among a host of others.

But this is primarily a contemporary troubadour record. And there appears to be a seemingly unending source of lyrical material here. To showcase it are several vocalists who have collaborated with Meeco to provide both the lyrics and vocals: Eva Ventura from Spain; Olivido Ruiz from Cuba; Rolanda Faria; and Eloisia da Silva from Brazil. They are all fine vocalists, who show great sensitivity for the material they sing. Eva Ventura casts the songs she sings with an otherworldly atmosphere and she is expert at phrasing as well. Her delivery is sensuous and breathy, with "Nocturna" and "Para Siempre a mi Lado" fine examples of her work here.

Eloisa's contralto is also quite beautiful and memorable, but it is Rolanda Faria who is the record's outstanding vocalist. He is able to tell a story, vary his tone ever so slightly on "Nao Chora Nao," where he literally cries out the song and pierces the heart. On the moody, existentialist-sounding "Neste Mundo," Faria, in a classic baritone—alternately exquisitely noir and star bright—turns the lyric into a black and white, dark and bright narrative reminiscent of the great Brazilian Dori Caymmi. Faria then returns for a memorable three-way interplay with Henderson on hauntingly beautiful Harmon muted trumpet and Carter, who executes a bass line with stabbing, probing precision.

The instrumentalists provide great atmospherics as well. The classical music-oriented David Friedman does a positively symphonic reading of the score on "Neste Mundo" and Hubert Laws plays a haunting alto flute that weaves in and out of Friedman's vibes and also Pepe Berns' pedal point bass. Henderson provides the most sensuous moments on "Noitas Vazais" and then returns to score a fine interplay with Newman, who both swing through the rhythms of Rolo Rodriguez's percussion and Olivida Ruiz's mesmerizing vocals.

The record may have minor flaws. For one it is much too long. Perhaps Meeco could not find a way to keep some of the material out. But it is an accomplished work, comprising some of the most romantic charts that ought to haunt the waves of jazz and Latin radio stations for a long time to come. As a first record this is music of considerable character and maturity. Meeco has a fine grasp of idiom and phrasing, and also a singular feel for writing material sensitive to tone and color.