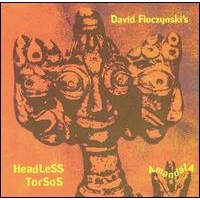 The primary challenge facing guitarist David "Fuze" Fiuczynski appears to be keeping his great powers in check. Fuze has a frightening mastery of his instrument, which manifests itself in exquisite control of tone and inhuman virtuosity. His newly-revised FHT represents an outgrowth of the Screaming Headless Torsos, which scream no more after the departure of vocalist Dean Bowman. But the basic thrust of the group remains the same: funk tinged with jazz; jazz tinged with funk. Color everywhere; expectations eagerly denied. Fuze makes a conscious effort to focus his energy on thematic development and group cohesion, and as a result Amandala represents a step forward.

The compositions on Amandala, all originals, were written by Fiuczynski as well as drummer Gene Lake and percussionist Daniel Sadownick. They offer occasional hints at threads and themes from earlier Fuzelicious material, revealing a higher vocabulary for this long-standing NYC group. Amandala documents a progression in maturity for both the guitarist and his quartet. Subtlety plays a larger role here; and new shades of rhythm and tone expand to fill the space which used to be occupied by vocals. Sadownick's percussion plays a critical role in enriching the polyrhythmic foundation of the group and enabling the other players to step out and explore. Overall, the feel of Amandala is much more open and spacious than previous discs. But despite his own best efforts, it's Fiuczynski who leaves the tallest shadow. He experiments with highly processed dimensions of texture; his angular lines twist about, toying with rhythm and defying harmonic expectations.