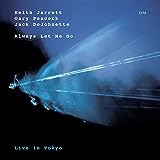 On last year's most impressive disc Inside Out, pianist Keith Jarrett took his Standards Trio into uncharted territory. Instead of contining to reinterpret the classics, the group chose the route of collective improvisation. With their new double-disc set Always Let Me Go, Jarrett and trio continue along the same lines. Given that this performance was recorded live (during two April 2001 dates in Tokyo), it's especially rich in the kind of spontaneity and energy that makes free improvisation shine. And as we've come to expect from ECM, the sound is crisp and clear.

Now that the excitement over Jarrett going free has subsided a bit, it's an excellent opportunity to examine the music on its merits. While these pieces are not composed in the traditional sense, they preserve a number of qualities that have long distinguished the group's playing. Jarrett makes melody his number one priority, constructing lines that put his characteristically lyrical voice on display. (And, in case you're interested, you also get to hear his real voice—though not intrusively so.) He indulges his affinity for gospel and Americana quite regularly. Bassist Gary Peacock has a wonderfully intuitive way of ducking down when propulsion is needed, then rising to the top when he hears an opporunity to interject melody.

The opening track, "Hearts in Space," clocks in at over 32 minutes, making it a true endurance effort. The tune launches with Jarrett punching out knots of sound as the trio gradually gets up to speed, and by the end they're sailing at full steam through high-energy swing. "Tsunami," from the second disc, lives true to its name, with insistent washes of sonic energy. During the more open passages, the freely improvised aspect of the record comes through most clearly. Drummer Jack DeJohnette, who's always chafed at the bit, utilizes the full range available from his kit.

In the end, it's important to consider the relevance of expectation. The Standards Trio always made a point of total integration, and their voyages through composed music had a free-wheeling aspect. That hasn't changed. If you look for the signature features that have defined this group's work, you'll find them here. If you look for the rawness and clarity of Inside Out, this set falls short. It's a bit long-winded, and patterns sometimes persist beyond their effective lifespan. But those are very exacting standards indeed. Take the music at face value, and it's a very satisfying listen. With this degree of variety over more than two hours of live performance, Jarrett has made it clear that his turn toward free improvisation provides substance, depth, and excitement.