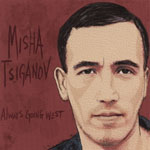 Pianist Misha Tsiganov became smitten with the jazz art form as a youngster in Russia. Residing in New York City since the early 1990s, the artist has acquired an impressive resume via stints with percussionist Norman Hedman and trumpeter Randy Brecker, for example, while scoring and recording for TV. Here, Tsiganov drives his band into the fast lane amid a string of rapidly-flowing and vivacious bop workouts, while sustaining a group-centric vibe throughout.

With the opener "Anthony, Tsiganov's fluid, counterbalancing chord progressions helps steer the quartet through a torrid swing/bop motif, where trumpeter Alex Sipiagin and drummer Gene Jackson mix it up in hyper-mode fashion. But the pianist intermittently tempers the quartet's velocity during a few gentle ballads. And one of the striking characteristics of this album pertains to the ensemble's ability to go for the proverbial jugular in a seamless manner that conveys a degree of weightlessness. In addition, Tsiganov demonstrates great sensitivity due to his moments of restraint and penchant for executing dynamics when it counts.

Percussionist Samuel Torres' extended solo on "Dark Eyes Intro, provides the initial ammo for the band's briskly swinging impetus during the follow-up composition, "Dark Eyes. Tsiganov finalizes the outing on a somber note during his pronouncement of tenderness and warmth on the closer, "Gone from My Mind. Overall, the leader's crafty arrangements and impressive technique sparks a prismatic musical vista, augmented by his band-mates' authoritative execution and lyrically-charged soloing spots. No doubt, Tsiganov is one to watch...