By JACK BOWERS
December 1, 2000
Sign in to view read count 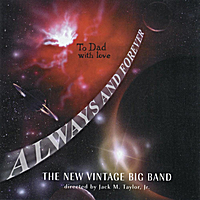 The first thought that springs to mind when listening to the derriere-kicking New Vintage Big Band is, "Where have these guys been hiding?" The answer is the greater Kansas City area, where the ensemble has been honing its ample skills since Jack Taylor pieced it together more than nine years ago "to provide an outlet for the performance of modern big-band Jazz." There may be other big bands as good as this one, but the opinion here is that one would be hard-pressed to find any that are better. There are fourteen selections on Always and Forever, which together stretch the playing time of a compact disc to its outer limits (78 minutes-plus), and each one sparkles like an unblemished 24-carat diamond. In short, there's not a weak link in the chain. The band's superior use of dynamics and shadings is especially persuasive, as are the power and precision of its various sections and the unflagging resourcefulness of its soloists. Truly, this is a band that upholds Kansas City's time-honored tradition of producing world-class Jazz, and our hat's off to Taylor and his colleagues for persevering in the face of seemingly overwhelming odds to help keep this indispensable music alive and swinging into the 21st century. While there are muted echoes of Basie, Herman, Kenton, Rich and others along the way, Taylor believes that big-band Jazz is "an exciting and dynamic musical art not limited to musical styles of the past," and the New Vintage Band has used the durable substructure of its predecessors as a platform on which to fashion a musical temperament that is inclusively modern yet always melodic, rhythmic and wholly accessible. The Herman influence is perhaps strongest on Gary Anderson's memorable arrangement of Gabriel Fauré's "Pavane," while memories of Buddy Rich's late-60s juggernaut are enkindled by John LaBarbera's "Best Coast." Pat Metheny, one of KC's best-known sons, is represented by his compositions "Always and Forever" and "(It's Just) Talk," both tastefully arranged by Bob Curnow. Matt Harris wrote and arranged "Mira, Mira" and "M.O.T," while Chris Braymen and Chip McNeill did likewise for the loping "Irrelevant, Incompetent and Immaterial" and the impulsive Latin-flavored closer, "Break the Ice," respectively. The other charts are by Rick Stitzel ("Without a Song"), Johnny Keating ("Autumn Leaves"), Sammy Nestico ("Old Devil Moon"), Tom Kubis ("The 'Bluest' Blues"), Frank Mantooth (the moving and too-seldom-heard "Young and Foolish") and Brad Morey (Gershwin's "Summertime"). The lead trumpets (a four-way split among Brian Bass, Danny O'Brien, Jay Sollenberger and Taylor himself on "Old Devil Moon") are awesome throughout, as is the band's hard-working rhythm section —pianist Dave Baker, bassist Craig Akin and drummer Kelly White. The various soloists are, as we noted earlier in this review, uniformly admirable. As Taylor writes, New Vintage "includes eighteen of the finest musicians Kansas City has to offer" (not all of whom play on every track), and there's no gainsaying that opinion. Should Always and Forever be considered a sure bet for inclusion on anyone's list of the top ten big-band Jazz releases of the year? That's a no-brainer.

About The New Vintage Big Band