By JACK BOWERS
January 1, 2002
Sign in to view read count 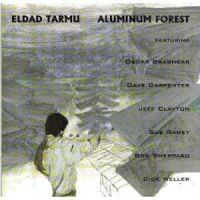 With an uncelebrated vibraphonist at the helm of an album titled Aluminum Forest, I was bracing myself for music aimed straight toward the heart of “smooth Jazz” radio. Wrong. This is uncompromisingly straight–ahead post–bop Jazz — and I should have guessed as much from the list of personnel, which includes such prominent names as trumpeters Oscar Brashear and Jack Coan, reedmen Bob Sheppard and Jeff Clayton, bassist Dave Carpenter and the underappreciated vocalist Sue Raney (on “Hold That Thought”). Tamu wrote every number (ten in all) except Rodgers and Hammerstein’s wistful “It Might as Well Be Spring” and arranged all but one, “Morocco Rocco,” which he co–arranged with his brilliant piano–playing buddy, Tamir Hendelman. With names like theirs (and song titles like “Rocco,” “Milk and Honey” and “Fureel”) one might reasonably expect a Middle Eastern (or at least an Israeli) temperament to hold sway, but that’s not the case. In fact, anything other than an inflexible modern Jazz viewpoint would be hard to unearth. Tamu’s roots may lie elsewhere — that’s not made clear in the brief liner notes — but his heart is unequivocally bound to Jazz, American–style. He’s an excellent player too, as are the others he has gathered around him. The songs are for the most part energetic and alluring, and the outcome sounds much like a loose–limbed jam session led by Terry Gibbs, Joe Locke, Steve Nelson or Stefon Harris. An unforeseen but decidedly welcome surprise package, one that is easily recommended.

Morocco Rocco; Set in Motion; Lovers and Liars; Milk and Honey; Aluminum Forest; Modern Lady; Fureel; Hold That Thought; It Might as Well Be Spring; Jonah (52:06).