By HRAYR ATTARIAN
July 2, 2012
Sign in to view read count 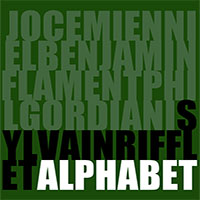 French composer/reed player Sylvain Rifflet is recognized not only for his work in jazz, but also in film music. With his current quartet, he has broadened his palette to include world, rock and avant-garde influences. The resulting Alphabet defies narrow classification as it straddles many styles.

It certainly is a very cinematic affair, often resembling a movie soundtrack in its expansiveness. The whimsical "® and Silence" is reminiscent of a spaghetti western theme, with Philippe Gordiani's logically progressing guitar improvisation adding a serious and imaginative dimension.

Rifflet's deft use of electronics makes them an integral part of his compositions, rather than just for ambient effect. "To Z" features his metallophone and Jocelyn Mienniel'ss flute, punctuating the poetic narrative of percussion and electronics.

Seemingly opposing ideas that create stimulating contrasts is one of the album's leitmotifs. On "Hyper Imaginative JuKe (box) (part 1)," the electronic sounds of the modern world are tempered by a pastoral flute gently blowing in the dusky mood created by the other instruments. while on "Electronic Gun," classical harmonies melt into a vaguely Levantine tenor sax solo that, buoyed by Benjamin Flament's drumming, weaves a complex tale. The music reaches a tango-esque climax in Flament's heart-pounding beats before coming full circle to the chamber ambience.

Another undercurrent is the seamless amalgamation of various musical heritages. Flament's various instruments create a Middle Eastern atmosphere on "Q," while Gordiani's guitar infuses it with western sensibilities. Over this rhythmic bed Rifflet's expansive saxophone, not unlike some of Jan Garbarek's early work, creating a cross- cultural lyric sonnet. "A L'Heure," on the other hand, has Gordiani's flamenco like guitar and Mienniel's almost baroque, airy flute enhance the spiritual mood developed by the tolling of old church bells.

This type of genre bending is best heard on the closer "Vowels, Kids & Baloons" a track that distills the essence of the entire disc. Futuristic electronics give way to Gordiani's rocking guitar that is supported by the quasi-Scottish reeds almost like a deconstructed Jethro Tull song. Meanwhile the subsequent clarinet and flute duet is spiced with strong near-east flavors.

This near perfect opus with its sublime maturity and stimulating creativity is the pinnacle of Rifflet stellar career so far, and has the makings of a modern masterpiece.