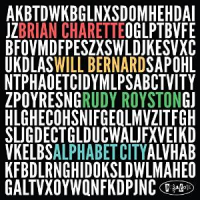 Alphabet City is organist Brian Charette's ninth album, titled for the part of Manhattan where he lives (in the building which featured on the cover of Led Zeppelin's Physical Graffiti, apparently). He's alongside guitarist Will Bernard and drummer Rudy Royston, both familiar names on numerous other releases for Posi-tone Records: a standard, though high quality, organ trio, but the leader's compositions give it a far-from-standard repertoire.

The 12 tunes, all originals, are all pretty short, pretty snappy and, in the case of the melancholy "White Lies," pretty. Mostly, they're mid-to up-tempo numbers, with Charette's Hammond B-3 organ often adding a touch of soul. Fittingly for a musician with wide-ranging influences and a resume that includes work with Cyndi Lauper, Joni Mitchell, Lou Donaldson and Paul Simon the tunes on Alphabet City cover a broad spectrum of styles.

Charette has a nice line in notes about these tunes, explaining some of the titles and some of the musical constructs—sadly, they're part of the press pack but not the album liner. So we learn that "Hungarian Major" uses a scale from Hungary—although that doesn't explain the Frank Zappa-ish feel of Charette's organ; "They Left Fred Out"—suitably funky, with Royston's drumming at its punchy, driving, best—takes inspiration from James Brown and laments the absence of trombonist Fred Wesley from a Brown biopic; the prog-meets-fusion "Not A Purist" is influenced by Deep Purple and the Mahavishnu Orchestra.

While it's intriguing to hear the Mahavishnu sound filtered through the lineup of an organ trio, the real pleasure of Alphabet City is in hearing Charette, Bernard and Royston moving with confidence through the blues, funk and jazz of "They Left Fred Out," "East Village" or (with added '70s country) "Sharpie Moustache."