Alisha's Quartet: Along for the Ride 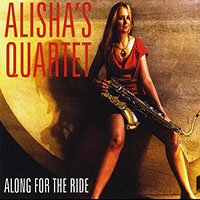 Alisha Pattillo's tenor saxophone case sports an impressive variety of destination stickers, real and metaphorical, where the young artist has visited in her life. Anglo-Australian, Patillo was raised in Singapore and proceeded to woodshed throughout Southeast Asia before receiving a first-rate schooling at Australia's Queensland Conservatorium of Music in Brisbane, majoring in jazz saxophone and education preparation. So, after completing her studies in 2006, where does Pattillo finally land? Well, in Houston, Texas, of course, where she has become a snug part of the "Houston Jazz Mafia" that includes multi-instrumentalist Henry Darragh, singers Melissa Darragh, Tianna Hall, Jacqui Sutton and Danielle Reich, guitarist Paul Chester and (by extension), trumpeter Carol Morgan. Houston has a very heterogeneous jazz community, it is a place perfectly suited to Patillo.

Pattillo's debut Along for the Ride is a collection of jazz- funk standards found just this side of Cannonball Adderley and Eddie Harris, whose "Freedom Jazz Dance" opens Patillo's disc. Pattillo's approach is to lay out an idea and let the band do its thing. She is largely successful in this. These songs were obviously honed on the bandstand into the tight orbit they inhabit. The saxophonist employs guitarist Paul Chester as her harmony continuo, in place of the piano. Chester emerges as a major driving force in the Houston area by displaying his broad adaptability as evidenced by his role here and that which he played on Jacqui Sutton's recent Notes From the Frontier: A Musical Journey (Toy Blue Typewriter, 2012). It is a band whose performance is precise from experience.

Pattillo's saxophone style is muscular and confident. Her influences are many, but fellow Houstonian and tenor saxophonist Wilton Felder, from the Crusaders (another Houston band) looms particularly large. Pattillo covers Felder's ballad "My Lady," from that group's Street Life (MCA, 1979) and purloins the band's setup of "Eleanor Rigby," from Scratch (Blue Thumb, 1974). She plays two tunes from contemporary saxophonist Joshua Redman—"Headin' Home" and "Mischief," both from Moodswing (Warner Brothers, 1995)—dispatching them with funky authority and a perfect tone. Pattillo properly adds to that embarrassment of wealth of jazz talent in Houston.

Title: Along for the Ride | Year Released: 2012 | Record Label: Self Produced