The Marvin Stamm Quartet: Alone Together 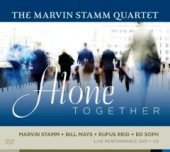 Alone Together is not only another splendid album by trumpeter Marvin Stamm's quartet (does he ever produce anything less?), it also comes with a bonus—a DVD whose playing sequence duplicates the CD and allows one to see and hear Stamm, pianist Bill Mays, bassist Rufus Reid and drummer Ed Soph as they study one another, alertly interact and carefully work things out in a concert taped on November 2006.

The quartet as it now stands has been performing together for more than a dozen years, and the rapport and camaraderie are readily apparent. These gentlemen are longtime friends who obviously take pleasure in playing together. You can hear it on the CD, and see it in their faces on the DVD. Stamm underscores the point in his cogent liner notes: "Our sensitivity to one another is the only boundary; and because this is an innate quality within each of us, it allows us complete freedom of expression. This is the joy of our playing together.

That freedom is immediately visible on "Alone Together, on which Mays "plucks the piano strings to lend a bracing twist to his solo, and surfaces elsewhere throughout the invigorating session. This is especially true on Mays' playful "Fun House, which swings happily along behind gregarious solos by Mays and Stamm. Mays also wrote "Lagrima Agradecida, Stamm the ballad "When She Looks at Me and the mercurial "T's Butter, Reid the lively "Come Out and Play. Completing the program are Bronislau Kaper's haunting "Invitation, Robert Wright and George Forrest's "Baubles, Bangles and Beads (from the Broadway musical Kismet) and the title song by Howard Dietz and Arthur Schwartz.

The recording is crystal clear, albeit slanted a bit too heavily toward Mays' piano. No problem during solos, but his comping is at times intrusive. Not his fault, of course. Soph and Reid fare better, balance-wise. Reid has a number of tasteful solos, while Soph unleashes his impressive arsenal on "T's Butter, following the last of Stamm's admirable solos. As both the CD and DVD have playing times approaching an hour and a quarter, there's no cause for complaint in that area.

Any written appraisal, of course, only scratches the surface. As Stamm observes, "One can talk and write about the music, but in reality, it is all in the listening. The suggestion here is that you take his advice and listen (and see) for yourself.

Alone Together; Come Out and Play; Invitation; Baubles, Bangles and Beads; Lagrima Agradecida; Fun House; When She Looks at Me;