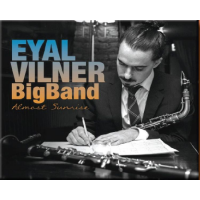 Suddenly, it seems, the state of Israel has become a focal point and incubator for contemporary jazz. A new wave of world-class musicians led by the three Cohens (not to be confused with Broadway's three Cohans) has crossed the ocean to plant the Israeli flag firmly in the midst of what was once considered an unassailable American stronghold. Among the more recent and impressive arrivals is Eyal Vilner, a composer / arranger / saxophonist from Tel Aviv who came here in 2007 and formed his own big band a year later while he was a student at the New School for Jazz and Contemporary Music in NYC.

Vilner's first album, released in 2011 and shrewdly titled Introducing the Eyal Vilner Big Band, received glowing reviews for its ardor and musicianship, and here we have the second, Almost Sunrise, performed by an even larger ensemble, only four of whose members (including Vilner) were present on the band's maiden voyage. That's irrelevant, as the newcomers are seasoned pros who never flinch at the sight of an obdurate chart. Vilner certainly gives them ample reason to flinch, fashioning a series of well-drawn compositions and arrangements that demand their undivided diligence and awareness.

For reasons perhaps known only to himself, Vilner has chosen to implant half a dozen vocal tracks among the album's thirteen selections, three by Charenee Wade, two by Wade, Nadia Washington and Robert Turner and one (Cole Porter's "It's All Right with Me") by Wade and Turner. More about them anon. The band is splendid on its seven numbers, starting with Vilner's irrepressible flag-waver, "The Rabbit," and proceeding through Benny Golson's well-known "Stablemates," Clark Terry's buoyant "Tee Pee Time," Vilner's lustrous "Almost Sunrise" (featuring tenor saxophonist Asaf Yuria), a pair of charmers by Jimmy Owens, "It Be Feeling Like the Blues" and "The District of the Blues" and, as a bonus, a handsome instrumental version of "Centerpiece" (sung earlier by Wade, Washington and Turner) showcasing trombonists John Mosca, Nick Finzer and Max Seigel. Elsewhere, Vilner solos persuasively, as do alto Andrew Gould, tenor Lucas Pino, trumpeters Wayne Tucker and Greg Gisbert, clarinetist Dan Block and bassist Jennifer Vincent.

As to the vocals, Wade sings with clarity and warmth on "Lush Life," "It Don't Mean a Thing" and "The Gypsy," while the trio does no harm on "Straighten Up and Fly Right" and "Centerpiece." If Wade and Turner are somewhat less engaging on "It's All Right with Me," that's a minor quibble when there is so much pleasurable music to be heard elsewhere. Like its widely praised precursor, Almost Sunrise proves another clear-cut winner for Eyal Vilner's impressive big band.

The Rabbit; Stablemates; It Don’t Mean a Thing; Lush Life; It Be Feeling Like the Blues; Straighten Up and Fly Right; The Gypsy; The District of the Blues; It’s All Right with Me; Centerpiece; Tee Pee Time; Almost Sunrise; Centerpiece (bonus track).