By GLENN ASTARITA
September 1, 2000
Sign in to view read count 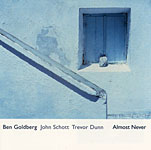 Almost Never represents the latest effort from Bay area musicians, clarinetist Ben Goldberg, guitarist John Schott and bassist Trevor Dunn. And while they have recorded as a unit along with drummer Kenny Wollesen, under the moniker of Junk Genius, Almost Never signifies their freshman outing for the modern jazz-improvisation based Nuscope Recordings label.

The musicians seemingly defy gravity with their light touch and flotation style of interaction on the opener, “Pitchbend,” partly due to Goldberg’s soft, vibrato-less lines and Dunn’s wavering yet quintessentially solid pulse whereas, Schott comps and prods with delicate voicings. The band elicits a soothing whisper of wind on pieces such as “D/L” and “Lone”, while they also inject sequences of whimsy and pathos into their curriculum.

On “Pause,” the trio instills a sense of climactic movement in altogether linear fashion as its members harmonize intersecting themes and motifs yet engage in dialogue that might suggest upward movement. Hence, lucid imagery prevails throughout. With “Zero,” the band articulates implied turbulence as Goldberg and Schott exchange subtle dialogue along with some lilting free jazz interaction amid Schott’s variable crescendos.

Almost Never is a paragon of understated themes and synergistic interplay as the musicians meld ethereal musings with microscopic motifs and flowing statements that seem to embark on an unaffected course. A humbly satisfying, tranquil yet adventuresome occurrence it is.