By DAN MCCLENAGHAN
February 12, 2012
Sign in to view read count 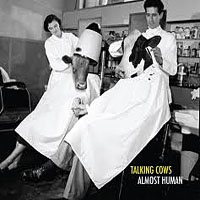 Talking Cows may be the world's only bovine-themed jazz group. Titles of previous CDs include Bovinity (Morvin Records, 2006) and Dairy tales (Morvin Records, 2009). Almost Human indicates a move further in the primate direction. But where a true bovine creature may have an aspect of the ruminative in its nature, the Talking Cows does not. This Dutch quartet's music is thorny, intense, and hard to categorize—a sort of off-kilter avant-garde, mainstream brew much like that of pianist Andrew Hill or saxophonist Sam Rivers, tinted with a freewheeling humor and good-time mood. Talking Cows is wired tight and seemingly hell-bent on goosing the musical boundaries, surprisingly transforming a standard jazz quartet—featuring piano, bass, drums, and saxophone—into something distinctly its own.

The group's song titles suggest this is a group that doesn't mind having some fun. "Two Guys and Beer" has a breezy and engaging melody, much like a catchy theme song to a television comedy, while "Mooing Around" has a full-bore momentum, with pianist Robert Vermeulen playing the roll of loose cannon, working the angles with an abandon. This fits inside the tight rhythm laid down by bassist Dion Nijland and drummer Yonga Sun, all while saxophonist Frans Vermeerssen blows blistering notes.

"Not Yet" is an enticement to get the dancing shoes on while "Most Def!" features a prickly groove that rides on a bouncing rhumba beat mixed with some shake, rattle, and roll. It's as though drummer Sun is in the kitchen, making some noise with the pots and pans while the piano jabs and stabs all over the place.

The music of Talking Cows is an odd brew of danceable R&B, avant-garde free flights, and pianist Thelonious Monk's quirkiness, all stirred with a sense of humor that blends into something wonderfully original.

Hurdles in Three; A Serious Lack of Humour; A Stroll for Gonso; Dinner is Served; Not Yet; Most Def!; Hang Glider; Mooing Around; Two Guys and Beer; Hop On, Hop Off.