Jovino Santos Neto: Alma do Nordeste (Soul of the Northeast) 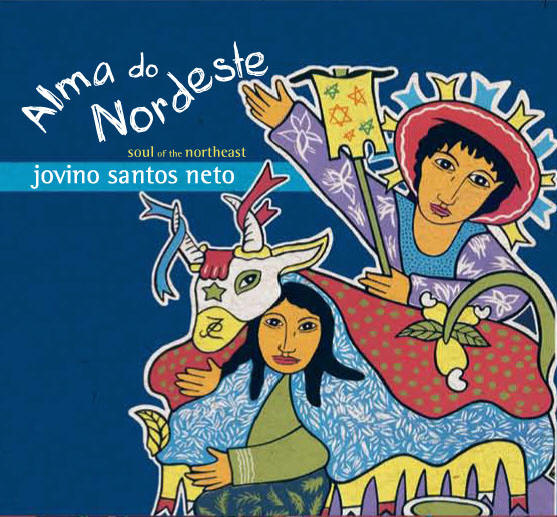 Great composers take their listeners past the simple execution of traditional form; instead they vividly describe their subject matter. Musical building blocks like tempo, texture, and dynamics shape mood and guide the listener's feelings. Cultural instruments reference specific countries. Creative interpretation adds perspective and displays the subject through the composer's eyes. Personal expression invites creative interpretations of the musician's opinions. Jovino Santos Neto brings all these pieces together into a striking set of compositions that describe the Northeastern region of Brazil on Alma do Nordeste (Soul of the Northeast).

Neto introduces unique compositional techniques to add depth and direction to several songs. A rubato flute conversation between Neto and Carlos Malta opens "Alma do Nordeste," leading into an exotic melody. They expand their thoughts into a collective improvisation and then guide the main theme through 6/8 and double time. Ambient sounds from the Pernambuco region introduce "Passareio," slowly transitioning into a 31-beat cycle performed by Brazilian percussion. The song avoids traditional melodic conventions, relying upon free improvisation that instigates imagery of birds. Bold compositional shifts outside Brazilian music norms help the listener build diverse imagery and capture new meanings.

Neto interprets the Northeastern baião rhythm in several different ways in order to express his vision. Saxophonist Eduardo Neves, Martins, and Neto explore the possibilities of a baião in 3/4 on the main theme to "São Pedro na Jangada." The group highlights the unique rhythm with a percussion feature, before Bahia fills around horn breaks. Ferragutti's polyrhythmic playing over a 7/4 baião creates an energetic introduction on "Festa na Macuca." Martins and Ferragutti exchange exciting solo ideas until Neto's inspired improvisation engages Bahia in spontaneous accents. Neto's creative manipulation of the baião helps him invoke specific ideas from the music.

Neto creates bold sonic imagery of Northeastern Brazil on Alma do Nordeste (Soul of the Northeast), employing diverse compositional tools to paint a strong picture. His use of Northeastern rhythms makes an authentic cultural connection. Neto's experimentations with time signature, texture, and instrumentation color the music and further focus his concept. The individual musicians invest significantenergy into Neto's concept, while strongly inserting their personal voices. Neto pulls thoughtful craftsmanship, stylistic knowledge, and expansive musicianship into his compositions on Alma do Nordeste (Soul of the Northeast), vividly bringing the culture of Northeastern Brazil to life.