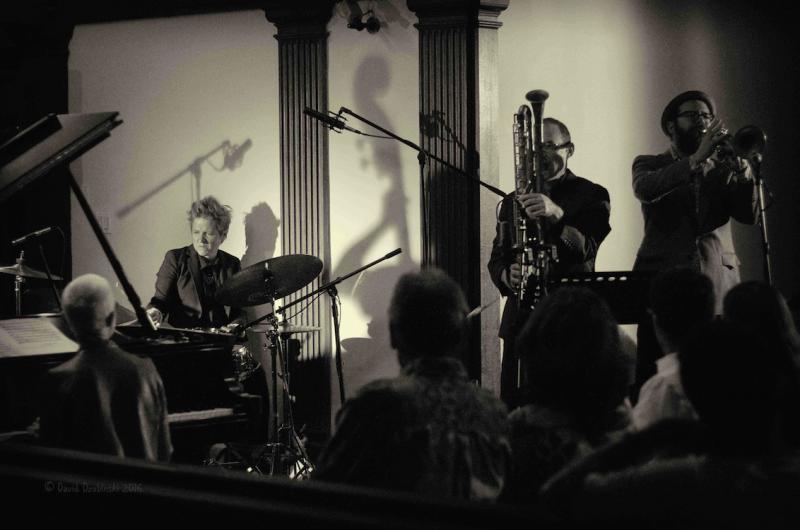 Allison Miller's Boom Tic Boom plays jazz, but the woman herself is hardly a jazz drummer. Though she can swing and improvise like nobody's business, Miller seems equally at home with the grooves of funk and Latin, or even—God forbid—the fist-pumping, downbeat-loving attitude of rock and roll. To be sure, any jazz drummer with a shred of notoriety will likely have the facility and range to adopt the comparatively simple patterns of most other genres. The difference with Allison Miller is that she's actually willing to do so. Miller is truly multi-genre musician because she approaches popular music forms with the same respect and ownership that she gives to her distinctive work within the jazz idiom. It takes confidence for a performer of her caliber to spend more than a token amount of time on rhythms that don't leave the listener's head spinning, and Miller does so with the utmost taste and creativity.

The drummer's open-mindedness allows her to flit between styles with the frequency and nonchalance of a teenager scrolling through Instagram filters. Her chimeric approach makes many tracks on the group's latest album, Otis Was a Polar Bear, feel like suites with distinct movements strung together in a logical but unpredictable progression, and this wildly amped up the group's performance appeal. In concert Boom Tic Boom played pieces exclusively from Otis (covering every tune but one), but the spontaneous formation of the segments within each song made the compositions unique to the moment, like pages from a coloring book filled in with different shades each night.

Boom Tic Boom's assortment of eccentric musicians (all of whom lead their own groups) parallels its stylistic diversity. Given the intensity of each musical personality, the group seems more like a collective than a band. The concert sequentially highlighted each individual, presenting every component of the group's sound so that the audience could better appreciate the vibrant cocktail that the musicians produced in conversation with one another. Boom Tic Boom's present lineup is its most compelling to date because, to put it bluntly, the band is bursting at the seams with weirdness. In the intimate and informal venue of the Philadelphia Art Alliance, with wide-eyed audience members clustered on benches and folding chairs, the musicians played even more boldly than on record, fully embracing their idiosyncratic voices without the constraint of a 50 minute time-limit.

Cornet player Kirk Knuffke was the first to stretch out, crooning the arrhythmic melody of "Lullaby for Cookie," with a warm, breathy tone. The "cookie" in question is Miller's new child (who was still "in the oven" when she wrote the tune), but the song is much more earnest, heavy, and emotive than the cute title suggests. Piano, bass, violin, and clarinet wove a droning pillow of harmony, washed over by gentle waves of hissing cymbals. Knuffke eased into the repeated theme as if the sound were pouring out of him, accentuating each pastoral chord change with a lyrical crescendo. The song collected the musicians and focused the audience, serving as the opening ceremony for a performance fueled by the leader's newfound maternal passion.

Reading the room, Miller used the audience's state of attentive tranquility as a launching point for the raucous "Hi-T." She announced the change of pace with a swelling snare buzz followed by a crack that seemed to spank bassist Todd Sickafoose into a surging groove of fat, powerful notes. The ensemble deftly skipped through a punchy five-part counterpoint section before opening up for Myra Melford's shockingly unbridled piano solo.

Melford is best known for her intrepid experimentalism (leading a quintet with the likes of Tyshawn Sorey and Liberty Ellman), and in that context the sheer vigor of her playing is somewhat overshadowed by the group's staggering complexity. With Allison Miller, however, the pianist casts away all erudite pursuits and taps her sublime, bluesy ferocity, attacking the keyboard like a lioness. Melford struck with enough passion to make her bounce on her seat, like a McCoy Tyner with two left hands. On "Pig in a Sidecar" she built tension by speeding up until it felt like the song was about to explode, before rescuing the audience at the last second. Toward the end of the show Melford illustrated the album's title track with Monk-like jabs and guttural rumbles: brilliant and visceral throughout.

Perpetuating the band's rejection of gender stereotypes, clarinetist Ben Goldberg opened "Fuster" with a delicate, crafty cadenza, like the flight of a jazz-crazed bumblebee. Propelled by a catchy bass riff, the tune hit the ground with something like klezmer on overdrive. The groove was contagious enough to last the whole song, but it was in fact a set up for a funky Cuban rhythm that shot out of the blue, unexpected but irresistible. Miller spiced the beat with a hip counter rhythm as clarinet and cornet echoed one another in a spiraling motif.

In contrast to this heart-palpitating circus, "Shimmer" (inspired by schools of silverfish) generated a meditative atmosphere, decorated with subtle piano arpeggios and pizzicato runs from violinist Jenny Scheinman. During her solo, Scheinman sent high-pitched ribbons of melody floating throughout the room, like shafts of light streaming through water.

Allison Miller herself brandished the most distinctive and fascinating voice of the bunch. Jazz drummers tend to be maximalist, catering to an audience that lusts over technicality. As listeners, we often perceive drumming not as a pattern of distinct hits, but rather as a percussive sea tumbling forward—a crafted barrage of sound that results from the meticulous dissection of each beat. The upshot is that individual hits are negligible, overshadowed by the intricate pattern they collectively exhibit.

But Miller puts more care and gravity into each individual stroke than any other drummer I've heard. Instead of shotgunning triplets left and right she seems to put immense consideration into every damn sound she produces. Her virtuosity is in her control and craftsmanship rather than her speed (though she does fire off rapid chops when she deems it necessary). Miller's impeccable technique and artful restraint are the glue that gives order and cohesion to her oddball ensemble. She serves as both a definitive leader, articulating each groove with saucy authority, and a nurturing, intuitive supporter for her band. At the end of each solo, for example, Miller would deftly and inconspicuously shift to a new groove, wiping the slate clean for the next soloist and giving them a fresh milieu to explore.

Allison Miller's Boom Tic Boom is a force to be reckoned with; moving, innovative, and downright fun to listen to. You would be wise to catch the act on tour, but until then give a listen to Otis Was a Polar Bear and you might know half of what you're missing.