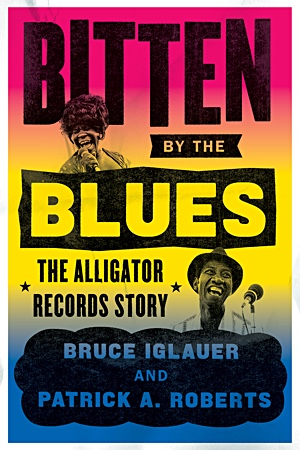 Bruce Iglauer's autobiographical history of Alligator Records is, in many ways, a story about technological change as much as it is about music.

Yet, even more than a book about music or technology, at its heart, "Bitten by the Blues" is a business tale—the story of how a young college student started his own label to record his favorite musician, and ended up building a successful operation that not only provided for his family, but facilitated dozens of musicians being able to earn a living from their music.

Iglauer and his co-writer, Patrick A. Roberts (a professor at Northern Illinois University), have written a history that is warmly conversational in tone, the equivalent of sharing stories with a good friend. At 338 pages the book is, if anything, shorter than it might have been—Iglauer only touches on a relative handful of the recording sessions he oversaw through the decades, and some of the artists with whom he worked receive only a few paragraphs when a couple of chapters on each would have not been seen as unreasonable by many blues fans.

Still, it's a fascinating tale, this story of how a music fan started his own label and grew it into perhaps the best-known of all the contemporary labels devoted to the blues.

The twin narrative arcs in Bitten By the Blues are the changing nature of the blues over the last half century, and, perhaps even more importantly to the story of a record label, the changing marketplace of music—itself driven in large part by the changing technology of how customers buy and listen to music.

As described in his memoir, Iglauer's entire career as owner of an independent music label has been shaped by a constant need to adapt to changing technological and market conditions. He traces the transitions from LPs and cassettes to CDs and downloads, right up through the current landscape of streaming services. He also recalls the days of trying to hustle airplay on radio stations, and get prominent placement of his releases in music store chains and independents—now all part of a bygone era.

On a cultural level, there is the shift in the blues audience—moving from a primarily African American fan base to one that is largely composed of suburban Anglo Americans.

Iglauer's memoir makes clear that his driving impulse in life has been as a music fan—he moved to Chicago to work for Delmark Records' Bob Koester, and he started Alligator when Koester declined to record Hound Dog Taylor. And he's clearly still a fan—he openly, unabashedly admires the various musicians he writes about in Bitten By the Blues, and still credits his love for the music powering his desire to keep Alligator going as he moves into his 70s.

But he readily admits in several passages that on occasions where he allowed the passion of the fan to overrule the calculations of the businessman, he often lost his shirt. It is his business acumen that he often seems proudest of—his ability to balance his love affair with the blues with the need to keep the label financially stable. In nearly every vignette about a beloved blues figure, every remembrance of a show or studio session, the business angle—a recording advance, eventual sales figures, touring income—is interwoven into the musical tale.

The fact that Iglauer's recollections are all colored by the pressures of keeping his business viable is likely why Alligator Records is still an ongoing concern when so many of its former rivals are either out of business, or have been acquired by a larger outfit: Iglauer's tale is that of a fan who was willing to take the steps necessary to assure the financial viability of the entire operation.

Iglauer's recollections of his dealings with the musicians whose work he released are consistently respectful, and he takes the blame for his share of the conflicts that inadvertently occur in any interpersonal relationship, particularly those where money is involved. (Although he also defends himself when he feels he was honorable—never blaming the musicians, but chalking it up to the vagaries of human nature.)

Longtime fans of Alligator Records will enjoy the inside glimpse into the recording sessions, Iglauer's tales of his interactions with everyone from legendary harp player Junior Wells to blues rock titan Johnny Winter, from the unfairly overlooked Fenton Robinson to label stalwart Koko Taylor. He touches on his own approach as producer, which resulted in the label acquiring a reputation for having an "Alligator Sound"—and admits he may have been too heavy-handed in the 1980s.

Another refreshing angle is that Iglauer briefly recalls the period in the early 1980s when Alligator issued a few reggae albums. Those who wondered why Alligator got into reggae, and very quickly got out, will find that passage revelatory. And the appendix with the full discography of Alligator Records includes those reggae releases (along with other now out-of-print titles).

This is an unfinished tale, of course.

The final chapters are starkly honest assessments of the current state of the music business—and Iglauer is upfront that he's not entirely sure what lies ahead. With sales of CDs plummeting, and downloads also on a slow decline, Iglauer ends his story with far more questions than answers. With onetime competitors Rounder, Blind Pig, Black Top, Delmark and Telarc all having gone bust or having been sold, in many ways Alligator is the last of the classic blues labels.

However the story finishes, though, Iglauer has given fans a fascinating look inside the workings of a small, independent label devoted to the blues.