By GLENN ASTARITA
October 1, 2000
Sign in to view read count 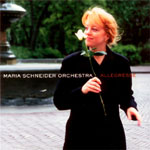 Few would debate composer/arranger and big band leader, Maria Schneider's significance to the world of jazz. A true stylist who possesses a gifted ear, an equally impressive pen and a penchant for extracting the very best out of her band mates, Schneider has three recordings to her credit which includes this highly anticipated new release, titled Allegresse.

In the liners, Schneider states..."For this recording I wanted to create music that conveys beauty." An accurate statement indeed as the overall production encompasses luminous, poetic themes and expressive horn charts. These characteristics become noticeably evident from the onset of the album's opener, "Hang Gliding." Here, the orchestral arrangement evokes imagery of a tiptoe waltz amid climactic developments and mild tempered choruses whereas, the title track combines linear motifs with arched lines atop velvety statements by trumpeter Ingrid Jensen who also performs on flugelhorn.

Basically, Schneider triumphs as a purveyor of beauty, through song, along with a deeply personalized and seemingly unyielding commitment to her craft. Allegresse is the complete package and should be deemed essential listening for ardent fans of orchestral/big band music or jazz lovers alike.