Tom Teasley: All The World's A Stage 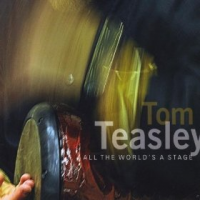 Percussion is often treated as rhythmic garnish but, in the right hands, it can be the meal itself. Light spices, meaty grooves and flavorful accents can provide more than enough sustenance for the ear if they're blended in the right proportions and percussionist Tom Teasley proves that this hypothesis holds water on this, his eighth recording.

All The World's A Stage is an overdubbed discourse on the art of tearing down cultural boundaries in the world of percussion. Teasley, a two-time winner of the Helen Hayes Theater Award recipient for outstanding sound design and recipient of three Fulbright-Hayes grants for performances in the Middle East, uses a stockpile of instruments acquired during his globetrotting escapades to create a percussive quilt of many ethnic colors. He taps into the very heartbeat of India, Ireland, The Middle East, Africa and other disparate locales as he crafts cinematic sound collages for the soul. In many ways, a more apt title for this album might have been All The World's A Source.

The journey begins with Teasley's balafon work taking center stage on "Oresteia Furies Dance," but things quickly move in another direction with "Rumba For Rama." Alto melodica moves into the spotlight on this number, as hand drums, cymbals and marimba sounds create a supportive base. "Nights Over Baghdad" is an appropriate labeling for a number that features a seductive melody over swaying grooves and Teasley turns his attention to expansive, Indo-infused music on "Fuska And Varuna," which features vocal percussion. His flute-like bansari whistle tweets and flutters around on "Return Of The Greenbird" and Asiatic influences are artfully blended into an Arabian tapestry on "Rise Up," which features koto-like sounds from Teasley's MalletKat and alluring melodies on alto melodica.

Teasley purposely avoids commitment to any single cultural framework during each piece, as he makes it his business to make the world a smaller place by joining far-flung instrumental traditions together. All The World's A Stage properly paints him as a true ambassador of percussive truth and togetherness.