Siegmund Freud's Mothers: Swedish Mingus Band: All The Things You Could Be By Now...

By IAN PATTERSON
October 10, 2007
Sign in to view read count 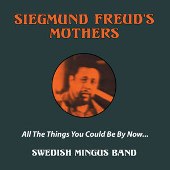 Considering his stature in jazz history and the enormity of the body of work Charles Mingus left the world (perhaps only Duke Ellington was more prolific) it is surprising that so few of his compositions have ever been covered. However, in the form of the Mingus Big band, the Mingus Orchestra, the Mingus Dynasty and Mingus Amungus, the flame of the great underdog is kept lovingly alive. To that list add Siegmund Freud's Mothers, a.k.a the Swedish Mingus band.

Formed in 2004 by saxophonist/arranger Lars Gulliksson, a leading light in the Swedish jazz/improvised music scene for the last fifteen years, Siegmund Freud's Mothers first release on Gulliksson's own Breathing Machine label showcases the depth and range of Mingus's compositions.

Opening with the gorgeous "Orange was the Colour of Her Dress Then Blue Silk the ensemble's playing is as tight knit as the colors of a rainbow. First pianist Matti Ollikainsen and then Lars Gulliksson on tenor solo on this Mingus masterpiece,which combines sweet New Orleans lyricism with powerful swing.

Although Gulliksson's arrangements are mostly very faithful to the originals there is plenty of scope for individual expression, which was entirely the point with Mingus's music; nobody here is trying to mimic Mingus alumni like alto player Eric Dolphy, trumpeter Clark Terry or pianist Jaki Byard, and hence, familiar tunes sound fresh.

The multiple changes in time signatures, notably on "Sue's Changes and "Meditations are handled seamlessly by the members of the band as though they have been playing these tunes all their lives. On the former, muted trumpet joins baritone sax to create a warm voice and tenor fuses with trombone on a piece which lifts, rocks and swings like a fairground ride. It then segues into an elegant piano trio passage before the tempo is raised once more and Gulliksson enters with a sweet and glowing tenor sound.

Mingus's music was as lyrical and melodic as that of the revered Duke Ellington, only more dissonant, and this can be heard to great effect on "Diane, with its anxious sounding piano and flute which blossoms into a luscious melody, saxophone and bowed bass soloing wonderfully on a track where the ensemble's dynamic playing steals the show. Mingus's critics said his music didn't swing, so he wrote "Moanin' by way of a polite answer. It swung like hell in 1959 and in the hands of Siegmund Freud's Mothers it still swings hard and fast nearly fifty years later, the group sounding larger than their combined seven pieces.

Musically, Mingus could do whatever he wanted. This fact, and the range of his influences from New Orleans to gospel and blues to be-bop is perfectly captured on the music selected and performed so impressively by Siegmund Freuds's Mothers, who more than prove their credentials as worthy torch bearers of the Mingus legacy. Recommended.

Orange Was The Colour Of Her Dress Then Blue Silk; All The Things You Could be by now if Siegmund Freud's Wife was Your Mother; Sue's Changes; Diane; Boogie Stop Shuffle; Meditations; Moanin'; Duke Ellington's Sound Of Love.

Title: All The Things You Could Be By Now... | Year Released: 2007 | Record Label: Breathing Machine