Gina Stockton: All That I Can Bring

By C. MICHAEL BAILEY
December 15, 2010
Sign in to view read count
Track review of "You Are My Strength" 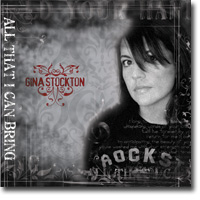 "Contemporary Christian Music" is one of those soft, descriptive classifications that is all but meaningless, save for the fact that the alleged genre needs to be described as something. Contemporary Christian Music cannot even decide what it is, or what characteristics it possesses. More conservative listeners believe that only music based directly on Holy Scripture can be called "Christian Music." Promoters and A&R personnel tend toward a more liberal definition as that position allows for more marketing options. Whatever the case, the genre sports are large following in the Evangelical and non-Evangelical United States, and deserves both a broader and more serious consideration, particularly during the Christmas season.

Vocalist Gina Stockton labors in relative obscurity behind headline acts like Jars of Clay, Michael W. Smith, Jeremy Camp and Casting Crowns. Her self-produced 2007 record (co-produced with husband, bassist Norm Stockton) reveals an off-the-beaten-path approach to praise music. Plush and smartly contemporary, Stockton's musical approach to Scripture is far reaching and comprehensive. "You Are My Strength," based on Psalm 59:16-17, incorporates pop, R&B, and Hip-hop elements, often combined with alchemic precision to produce what passes as today's popular music. Sleekly produced, "You Are My Strength," could easily be heard on the radio or in the sanctuary.

Title: All That I Can Bring | Year Released: 2010 | Record Label: Self Produced