Mike Stern: All Over The Place

By GLENN ASTARITA
August 7, 2012
Sign in to view read count
Track review of "All Over The Place" 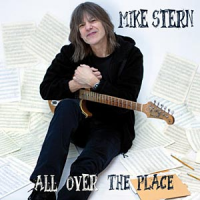 While Stern does go all over the place by cutting and pasting the jazz vernacular into various song forms and ethnocentric deities, he revisits familiar fusion territory on the title track. With a souped-up rhythm section featuring bassist Will Lee and drummer Keith Carlock generating smack, crackle and pop, Stern goes head-to-head with saxophonist Bob Malach via odd-metered time signatures, touching upon funk, rock and slashing improvisational segments. Along with pianist/producer Jim Beard, the frontline delves into call-and-response mechanisms and reinvents the primary melody. Stern ups the ante with scathing linear runs, while bending his strings into submission and zooming in for the kill. It's a divergent program, modeled with emotive persuasions, affable arrangements and technical poise.

Title: All Over The Place | Year Released: 2012 | Record Label: Heads Up International