Thom Douvan: All Over Again 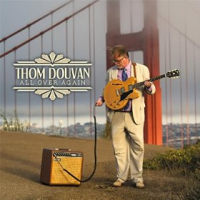 Hailing from Ann Arbor, MI, guitarist Thom Douvan launched his career in the 70s as an in-demand session artist for the Motown circuit, contributing to numerous hits by legends such as Marvin Gaye, The Four Tops and many icons of that era. In addition to funk and R&B, he's a skilled jazz guitarist. With Douvan's third solo release he delves into the contemporary jazz market space while employing well-known sidemen, bassist Trey Henry, keyboardist Mitchell Forman, bassist Jimmy Earl and other notables. And for guitar gear enthusiasts, Douvan identifies the acoustic and electric brands and models he uses on a per-track basis.

Douvan's melodic compositions feature multilayered tonalities, genteel picking or when he turns up the heat using distortion. He also abides by a democratic group focus, offering his band-mates ample soloing space. For example on the opener "Sephardia," drummer Michael Barsimanto tears it up with a hard-hitting spot that ignites a fire for Forman and the leader via a pulsating groove. Moreover, the keyboardist's cascading chord clusters and super-speed jazz runs are recurring factors throughout much of the album.

Douvan steers the alternating ensembles through up-tempo motifs and ballads, brimming with sanguine hooks and a breezy mid-tempo swing vamp on "Wes Coasting," where he executes jazzy Wes Montgomery-like chord solos and fluent single note licks. Moreover, Lynne Fiddmont's sultry vocals on "Then I Met You," receive plush support from Dr. Richard Niles' radiant strings arrangement and a harmonious theme. However, Rob McDonald shifts the momentum by delivering a jazzy, Motown-inspired vocal performance on "Believe In You."

Admittedly, I'm not an ardent follower of the contempo jazz scene, but the guitarist's tuneful and largely upbeat comps along with the inherent soul-groove, pop and rock inflections elevate this program considerably higher than your typical smooth jazz session. He does a lot more than simply churning out mall music type fare.

Title: All Over Again | Year Released: 2015 | Record Label: Self Produced